"Not Just An Ordinary Slowdown": Arvind Subramanian To Prannoy Roy

What the country faces today is "not an ordinary economic slowdown", Arvind Subramanian - the former chief economic adviser to the Narendra Modi government - told NDTV's Dr Prannoy Roy. Mr Subramanian, who earlier this year claimed that India's GDP growth between 2011 and 2016 had been overestimated by 2.5 percentage points, also cautioned against believing GDP (Gross Domestic Product) data as absolute indicators of an economy's prosperity, saying it was now "globally accepted that GDP numbers need some looking at carefully".

In an in-depth, hour-long interview Mr Subramanian, who is a graduate of IIM-Ahmedabad and the University of Oxford, suggested data like (non-oil) import and export rates (down to 6 per cent and -1 per cent, respectively), capital goods industry growth (down 10 per cent) and consumer goods production growth rate (from 5 per cent two years ago to 1 per cent now) might be better indicators.

"...there are also export figures, consumer goods figures, tax revenue figures... what we do (referring to his paper Validating India's GDP Growth Estimates) is take all these indicators and then look at a previous era of slowdown - 2000 to 2002 - and what you find is that even though the GDP growth was around 4.5 per cent all these indicators were positive," he said, adding that those key indicators were now either in negative growth or were barely positive.

"... this is not an ordinary slowdown... it is India's great slowdown," Mr Subramanian said.

"...they (key indicators) are either in negative growth or barely positive growth territory... the comparison is to the real sector of the economy... growth, investment, export and import... which matter for jobs. It is also a matter of how much revenue the government has to spend on social programmes," Mr Subramanian said, adding, "The real sector economy is slowing... jobs, you know, people's incomes, people's wages and of course government revenues". 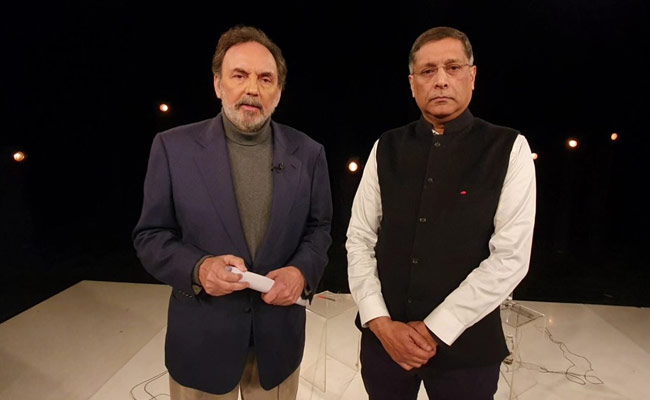 Arvind Subramanian has raised doubts about 2015 GDP data; he was then CEA to the government

In July Mr Subramanian had pointed to a whole host of indicators, for which growth rates had "collapsed", and asked "despite all these large shocks economic growth declined by very little, slipping from 7.7 per cent to 6.9 per cent. This situation invites a question: is it really possible that these five large adverse shocks had such little impact on GDP growth?"

At the time the government had criticised Mr Subramanian's research on several grounds, advancing the productivity and consumption surge arguments.

Mr Subramanian hit back by saying that if India had developed a unique model of sustained consumption-led growth it would have reflected in higher consumer confidence than polled.

Last year the Reserve Bank of India (RBI) said 48 per cent of people surveyed in May felt the general economic situation had worsened over the preceding 12 months.