About 47 per cent people who participated in the survey said they used NDTV online and 56 per cent said they watched NDTV 24x7, more than all other English media brands in India.

NDTV is India's most used media brand, a report by the Reuters Institute has found.

NDTV is the No. 1 choice in news for Indians who speak English and have access to the internet, a new report by the Reuters Institute for the Study of Journalism at the University of Oxford in England has found. NDTV is the first choice not just online, where it is miles ahead of the competition, but NDTV 24x7 is the clear go-to for the same population ahead of all other television channels and newspapers, the report says.

The India Digital News Report shows that Indians are embracing a mobile-first, platform-dominated media environment with search engines, social media, and messaging applications playing a key role in how people access and use news

In a market characterised by low trust in many news media, apprehensions over the possible implications of expressing political views, and widespread worries about different kinds of disinformation, the report highlights the concerns of an audience and the role of digital media news in an election year. 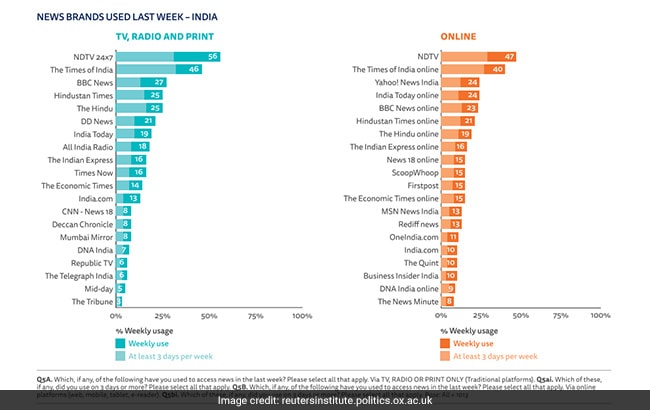 NDTV leads in online and other mediums, the Reuters Institute report says.

About 47 per cent people who participated in the survey said they used NDTV online and 56 per cent said they watched NDTV 24x7, more than all other English media brands in India.

The report also says that smartphones are the primary device for news for most respondents at 68 per cent, higher than comparable markets. Most people find news through platforms, particularly search (32 per cent) and social media (24 per cent).

It also found that more than half (55 per cent) the people surveyed said they feared that expressing political viewpoints online could get them into trouble with the authorities.

The report is based on a study commissioned by the Reuters Institute for the Study of Journalism, and conducted by YouGov using an online questionnaire in early January 2019.

The report can be found here.