In A First, Navy Day Celebrations Held Out Of Delhi

The Navy commandos carried out a slithering operation from the Sea King helicopter, followed by a demonstration of the combat skills of the Marcos (Marine Commandos) who, after a rescue operation, demolished an oil rig. 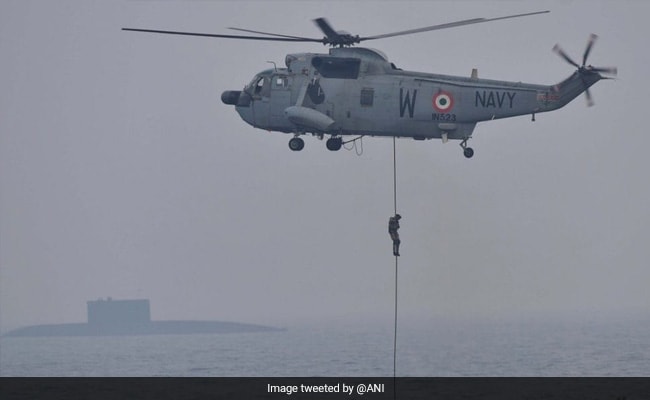 This was the first time the Navy Day was celebrated outside New Delhi.

The Indian Navy showcased its mighty combat prowess in a spectacular fashion through an Operational Demonstration on the occasion of Navy Day on Sunday.

President of India and the Supreme Commander of Armed Forces Droupadi Murmu was the chief guest at the event organised at Ramakrishna Beach here.

This was the first time the Navy Day was celebrated outside New Delhi. Sailors aboard the submarine INS Sindhukeerthi and INS Tarangini, the sail ship that circumvented the world, welcomed the President as they sailed past the venue.

The Navy commandos carried out a slithering operation from the Sea King helicopter, followed by a demonstration of the combat skills of the Marcos (Marine Commandos) who, after a rescue operation, demolished an oil rig.

A search and rescue operation was demonstrated with the commandos lowering themselves from Naval helicopter Chetak and the Advanced Light Helicopter ALH Mach-3 and carrying out the mission.

Four helicopters then demonstrated a precision landing onboard the warships lined offshore. Firing of rockets from the warships was another attraction at the event, along with a fly-past by the Naval aircraft.

Skydiver Anup Singh presented a book the 'History of Indian Navy' to the President, after he performed a free fall from an aircraft.A special song on the Indian Navy composed by the famous musical trio Shankar-Ehsaan-Loy and penned by noted lyricist Prasoon Joshi was released on the occasion.Shankar (Mahadevan) enthralled the audience by a live performance as his partners Ehsaan, Loy and Joshi accompanied him on the stage.

The President, Chief of Naval Staff, Union Minister of State for Defence joined the Navy officers, men and their family members in cheering Shankar as he rendered the song with full fervor.

The Indian Navy Band rendered instrumental support to the song.Illumination of the ships lined up in a formation provided a visual treat to the thousands of people gathered along the Vizag beach to witness the Navy Day celebrations.

The President inaugurated, in virtual mode, the National Open Air Range in Kurnool district and the Advanced Night Vision Products Factory of the Bharat Electronics Limited at Nimmakuru in Krishna district.

She also inaugurated National Highway projects worth over Rs 925 crore, including the Rayachoti-Angallu section of the NH-340, a four-lane Road-over-Bridge on NH-205 and six-lane grade-separated structures on roads in Kurnool city, Dhone and service roads on NH-44.