How Many Push-Ups? "As Many": Navy Chief Leads Young Cadets By Example

Chief of Naval Staff Admiral Singh told cadets of Hunter Squadron to get down on their knees and perform push-ups. 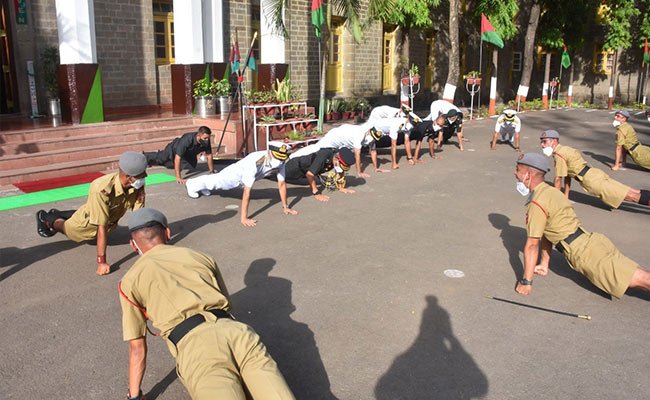 Their caps and masks in place, they all went about the exercise with Admiral Singh

Chief of Naval Staff Admiral Karambir Singh, who is the Reviewing Officer for the ceremonial Passing Out Parade of the 140th batch of the National Defence Academy (NDA), was captured lying face to the floor and performing a set of push-ups alongside young recruits in the forces.

Admiral Singh told cadets of Hunter Squadron to get down on their knees and perform push-ups.

Asked how many should they do, the 61-year-old Naval Chief said, "As many". Soon everyone was on the ground, the Chief included.

Their caps and masks in place, they all went about the exercise with Admiral Singh leading the charge. Some young cadets could be seen doing the knuckle push ups.

Over 300 cadets will graduate today to become officers in the Indian Army, Air Force and Navy.

Tomorrow, it will be the third time that the prestigious Passing Out Parade will be held under the shadow of COVID-19 pandemic.

The passing out parade is celebrated as a coming of age ceremony for cadets. Cadets' parents, or relatives, usually pip-in the ranks on their shoulders after which they officially become commissioned officers in the Indian Army.