Before the lighting of the eternal flame, marking the formal inauguration, a multi-faith prayer ceremony was conducted.

The inaugural ceremony of the National War Memorial in the India Gate Complex saw a sombre tribute to the fallen soldiers of the country that included a shower of flower petals form three helicopters flying overhead, to a multi-faith prayer, and the lighting of the eternal lamp by Prime Minister Narendra Modi.

The ceremony began with PM Modi addressing hundreds of former soldiers in the audience and paying tributes to those who have laid their lives for the country. He also targeted the Congress in a searing political attack, saying that the party had played with the lives of soldiers when in power.

PM Modi, accompanied by Defence Minister Nirmala Sitharaman and National Security Advisor Ajit Doval, then took a walk around the complex, taking a look at various installations. Before the lighting of the eternal flame, marking the formal inauguration, a multi-faith prayer ceremony was conducted.

In a poignant display of inclusivity, the tribute started with Hindu prayers followed by Islamic, Sikh, Christian and Buddhist prayers. The prime minister then lighted the eternal flame which was followed by wreath laying on the memorial by him, Ms Sitharaman and others. 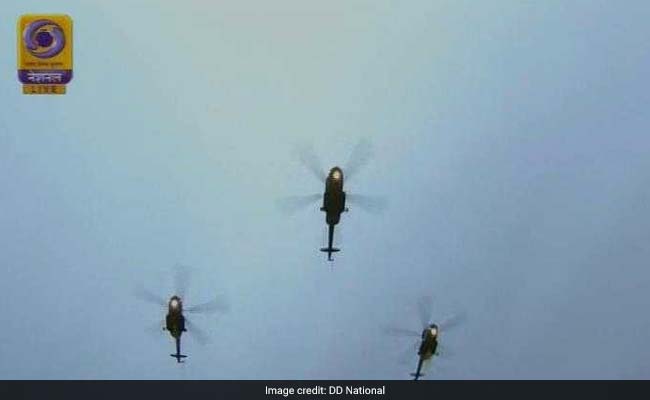 Helicopters flew overhead showering flowers on the occasion as soon after the India Gate Complex was lit up beautifully. The India Gate complex was lit up beautifully after the inauguration

The National War Memorial will not replace the Amar Jawan Jyoti which was built in 1972 underneath the India Gate arch to commemorate soldiers killed in the Indo-Pak War of 1971. The memorial will remain intact, a senior army officer told the news agency PTI.

The names of 25,942 fallen heroes, along with their rank and regiment, are inscribed in the 16 walls of the memorial.

Apart from the soldiers who were killed in the wars in 1947, 1962, 1965, 1971 and 1999, the names of the soldiers who died while on Indian Peace Keeping Force Operations in Srilanka is also inscribed on the memorial.