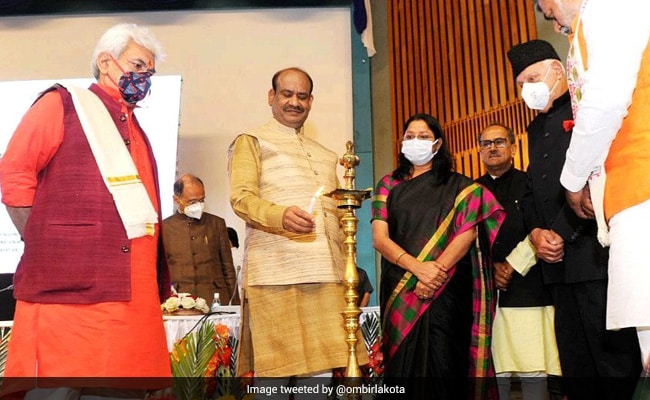 The outreach event was also attended by Lok Sabha Speaker Om Birla and L-G Manoj Sinha, among others.

National Conference president Farooq Abdullah today asserted that his party will win the next assembly elections in Jammu and Kashmir, indicating for the first time since the revocation of the erstwhile state's special status that his party would participate in the polls.

"We will win and I am telling you this with authority that if they conduct polls in a free and fair manner, then the National Conference will be the biggest party here," he told reporters on the sidelines of an event titled 'Parliamentary outreach programme for the empowerment Panchayati Raj institutions in Jammu and Kashmir'.

The National Conference (NC) chief, who represents the Srinagar parliamentary constituency regretted his party's non-participation in the 2018 panchayat polls and the 2019 Block Development Council elections.

"Our party did not contest the polls and I regret it. We should have (contested) and we will in the future God willing," the veteran politician said.

Advising sarpanches and panches, with Lok Sabha Speaker Om Birla and Lt Governor Manoj Sinha also present on the dais, Mr Abdullah asked them to remain in touch with people and listen to their problems, and not behave like bureaucrats who, he said, do not come to the rescue of people.

Expressing anguish over government officials of the Jammu and Kashmir administration not responding to phone calls of people, he requested Mr Sinha to instruct them to answer calls. "I have this complaint with the government officials that they do not pick up their phones as if some ghost is hanging upon them," he said.

Mr Abdullah said he picks up anybody's call because as a doctor he feels that the caller may be in some kind of distress.

"I do not ask him which religion or party he belongs to. I think of him as a human in whose heart God resides," he said.

He added that soon a government will be formed in J&K which will make the officers accountable.

Later, talking to the reporters, he said the bureaucrats would be held accountable.

"They will be accountable tomorrow for what they have done. Today, they think of themselves as kings, but they are not kings, they are the servants of people who have to work for the people," he said.