NASA, ISRO in talks to jointly develop a satellite for the first time 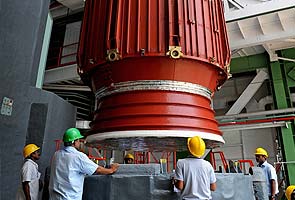 Bangalore: US space agency NASA and India's premier space agency ISRO are in talks for jointly building a satellite for the first time.

"Now, there is a feasibility study going on whether we can jointly make a satellite, with synthetic aperture radar (SAR) payloads working on two frequency bands - L-band and S-band", Chairman of Indian Space Research Organisation (ISRO) K Radhakrishnan told PTI in Bangalore.

He had a meeting with Mr Radhakrishnan, also Secretary, Department of Space, along with senior officials of ISRO to discuss the ongoing cooperative activities between ISRO and NASA and also the potential areas of future cooperation.

"...the joint satellite mission is an important step. It's not making an instrument and plugging it actually. It's working together. That's what we are discussing. It (working together) should happen in the next few months", Radhakrishnan said.

"Both organisations are coming together and saying let's develop it together...use your strength, use my strength. That's a good way of working", he said.

Mr Radhakrishnan said NASA's Jet Propulsion Laboratory would make the radar system "if it (in case of NASA, ISRO deciding to work together on the mission) is getting through".

Promoted
Listen to the latest songs, only on JioSaavn.com
On ISRO's role, he said, "We will be working together. Some will be built by us, some will be built by them. So, this (work-sharing) has to be finalised", adding, data generated by the mission would be used by both ISRO and NASA.