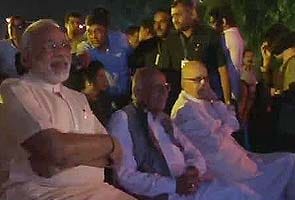 New Delhi: Narendra Modi ran into LK Advani at BJP leader Ram Jethmalani's birthday party on Sunday evening and made an attempt to touch his mentor's feet. But Mr Advani has clearly not put the events of two days ago behind him and reportedly had only cold vibes to share.

Apart from Mr Modi's bow of respect, the two top BJP leaders hardly talked to each other. Mr Jethmalani tried to make the two sit next to each other, but they both ensured that the host sat between them.

On Friday, Mr Modi was named the BJP's candidate for Prime Minister for the 2014 general elections. Mr Advani, the party's senior-most leader objected to that announcement being made at this time. He reportedly told BJP president Rajnath Singh that the decision would spell "political disaster" for the party.

Many attempts by senior party leaders to convince Mr Advani failed. He sent word that he would not attend a meeting of the BJP's team of top decision makers, the parliamentary board, called to make the Modi announcement. In an anguished letter, he told Mr Singh he was disappointed.

Soon after his nomination, Mr Modi drove over to Mr Advani's residence to seek his blessings. That night, as he returned to Ahmedabad, the Gujarat chief minister said former PM Atal Bihari Vajpayee and Mr Advani were "banyan trees that must be protected."

At a public rally today in Haryana's Rewari, Mr Modi praised the Vajpayee-Advani duo for the way they led the NDA government of 10 years ago.

Delhi was a stopover on his way back from Rewari, which is about 90 km away. He met Rajnath Singh and Murli Manohar Joshi, seen as another dissenter to the Modi-for-PM announcement till he came around and agreed to back a majority decision. After his name was announced on Friday, Mr Modi touched Mr Joshi's feet.

Promoted
Listen to the latest songs, only on JioSaavn.com
Mr Jethmalani's 90th birthday celebration was Mr Advani's first public appearance since Friday. He is scheduled to address a rally in election-bound Chhattisgarh tomorrow.

Yesterday, a number of party leaders like Rajnath Singh, Sushma Swaraj, Arun Jaitley and others visited Mr Advani. Mr Jaitley expressed confidence that the veteran will "eventually support" the "winning decision" of the party to announce Mr Modi presumptive PM.