All of it was evident in Uttar Pradesh's Meerut on Thursday when PM Narendra Modi formally launched BJP's Lok Sabha poll campaign. 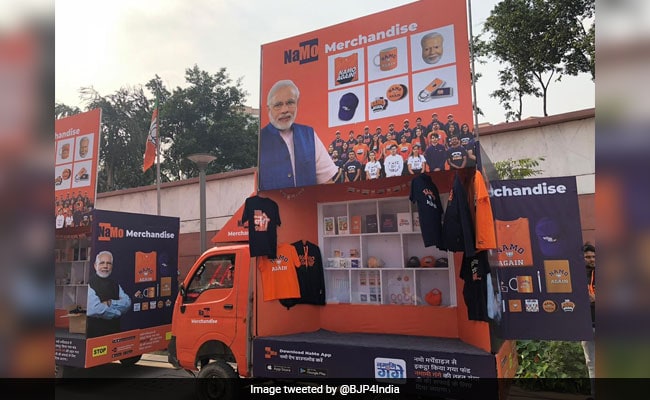 T-shirts, pens, badges and masks -- embellished with Narendra Modi's catchy messages -- are on sale. Wherever the Prime Minister goes, NaMo Raths follow him with all merchandise this election season. So, you have T-shirts being sold anywhere between Rs 499 and Rs 899, and other knick-knacks costing Rs 150, going up to Rs 500.

That's for anyone who wants to see and hear PM Modi at his rallies. All of it was evident in Uttar Pradesh's Meerut on Thursday when he formally launched BJP's Lok Sabha poll campaign. The party expects to raise people's involvement by cashing in on the Prime Minister's popularity.

PM Modi was scheduled to address the party rally in Meerut at 11 am, but by then scores of people had already lined up before the NaMo Rath.

People wore them at the rally as they cheered PM Modi. Many youths were seen sitting in the front row wearing the NaMo merchandise.

Days ahead of PM Modi's rally, two saffron-coloured mini-trucks with huge photographs of PM Modi went to various places across Meerut and Muzaffarnagar to sell the merchandise.

The BJP has said that the money collected from the exercise will be donated to the 'Namami Gange' project aimed at cleaning the river.

"People wear them as an expression of support for PM Modi. At his rally, people wear the merchandise as a reflection of their enthusiasm for him," a party leader said.

Many opposition leaders accuse the BJP of selling the party to an uninterested voter. Samajwadi Party leader Akhilesh Yadav had tweeted, "They didn't do anything in the last five years to provide jobs to the youth. But the BJP is adept in running its shop."