Manmohan Singh noted that what is happening in Kashmir is an indication of the suffering that strained ties between the two nations has brought about. 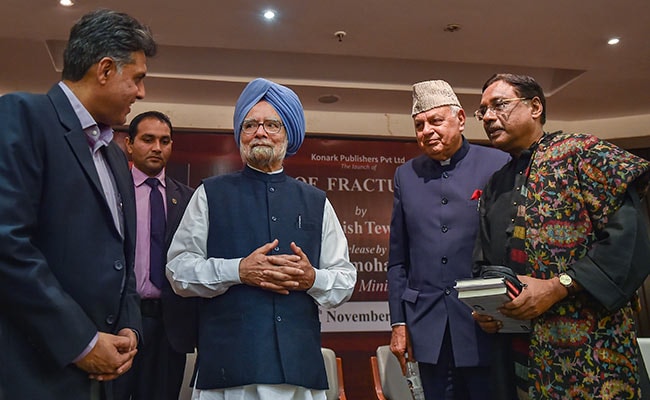 Manmohan Singh's comments came during his address at the launch of a book in New Delhi. (PTI photo)

He also noted that what is happening in Kashmir is an indication of the suffering that strained ties between the two nations has brought about.

Dr Singh's comments came during his address at the launch of a book "Fables of Fractured Times" by former Union minister Manish Tewari, for which the former prime minister lauded him.

"Today happens to be the November 26, when 10 years ago so many of our countrymen and women were butchered in the city of Mumbai due to acts of great terror that took the lives of nearly 170 of our dear citizens.

"One can only hope that saner elements would prevail between India and Pakistan to find a meaningful solution to the problem of getting a control over acts of terror. They do not achieve any purpose, as what is happening today in Kashmir is an indication of the suffering that the strained relations between our two countries bring about," he said.

Dr Singh noted that international affairs is a subject where changes are taking place at a pace which was unthinkable 10 years ago.

He said people have to come to terms with globalisation but there are countries which had championed the cause of globalisation, but are now becoming champions of protectionism, and this is a big change.

"The European Union is in trouble and nobody could anticipate that. Britain would walk out of the European Union, or that central European countries like Hungary and Poland would switch over to a brand of nationalism which runs counter to the value system which characterises the activities of the EU," he said.

Dr Singh said, "I hope all these issues will be debated, because they have a bearing on our country."

"We live in an increasingly interdependent world. What happens elsewhere in the world, globally and in Europe and the United States and also in the whole of Asia, has a bearing on the working of our country and what goes on in our country and how we can prevail upon the tensions that prevail in our neighbourhood," Dr Singh said.