Mumbai rain: Many short and long-distance trains were delayed or cancelled. Waterlogging was reported in several low-lying areas including Sion, Dadar and Malad

No suburban trains will run in Mumbai after heavy rain flooded several parts of the city since Sunday night, the Central Railway said.

"It's nature's fury... Moving trains in such rains in Kurla Thane section is safety hazard at this point of time... Suburban Train movement has been suspended till further advice. Inconvenience is deeply regretted," Central Railway tweeted minutes after midnight on Tuesday.

"Mumbai, we understand it's not been an easy Monday, but it's also been a rain spell like never before - it's the highest in a decade. 550 mm average of entire month of June has been exceeded in just last 48 hrs. We are truly trying our best. We request a bit of caution & patience," Mumbai's civic agency BMC tweeted.

The 24-hour forecast for Mumbai city and suburbs includes heavy to very heavy rain at a few places. The 48-hour forecast advises intermittent rain or showers.

"As per #IMDUpdates close to 200 mm or more rain per day is likely between July 3 and 5 which could hamper normal schedules. We will try our best to minimise discomfort & we request all to practice caution. Take care," the Central Railway tweeted.

At least 100 mm of rainfall was recorded between 4 and 5 am today in Palghar (near Mumbai) area alone, news agency ANI reported, with more than 360 mm recorded overnight. Santacruz recorded 91.9 mm of rainfall in a 24-hour period ending at 8.30 am on Monday and Colaba recorded 92.6 millimetres for the same time period.

Many short and long-distance trains were delayed or cancelled. Waterlogging was reported in several low-lying areas including Sion, Dadar and Malad. Conditions in low-lying areas have improved but water has not been cleared completely. Traffic crawled on Western Expressway as it rained intermittently.

Flights in and out of the city's Chhatrapati Shivaji International Airport were delayed by around 30 minutes, according to a spokesperson quoted in a Reuters report.

"There was a bit of waterlogging after heavy rain of more than 500 mm through Mumbai and its suburbs, but we have made arrangements to clear it," Sunil Udasi, Chief PRO of Central Railway, told NDTV, adding that all Central Railway trains are running, albeit with delays.

Mr Udasi also said that as many as 500 officers and staff had been deployed to clear traffic.

"13 trains have been cancelled today. After receding of water, train movement at Palghar was started at 8.05 hours at restricted speed of 30 kmph in view of safety," Western Railway tweeted.

Some trains including the Mumbai-Ahmedabad Shatabdi Express have been regulated in view of safety, it said.

Railway tracks between Sion and Matunga stations were submerged, according to ANI. As trains were stopped, passengers were seen walking on tracks.

Heavy winds led to bamboo from nearby construction work falling on the tracks at Marine Lines. All trains on the Churchgate-Marine Lines had been stopped. However, Western Railway has now tweeted to say "all four lines are working between Churchgate-Mumbai Central stations".

"Trains are running on Up & Down Fast Lines between Churchgate -Mumbai Central & traffic on slow lines is expected to be started soon," the Western Railway tweeted.

Mohammed Ayub Kazi, 30, was electrocuted inside his home in Shivajinagar in north-east Mumbai at around 11.45 pm last night. He was rushed to Rajawadi Hospital where he was declared dead.

Waterlogged airindia road. Levels rising on parts of LBS from ghatkopar to Kurla too. @mybmc@MumbaiPolice#MumbaiRainsLive#MumbaiRainpic.twitter.com/Nm3QxDtFu7

This is #mumbai in monsoons. The civil and railway authorities have simply no answer to this. They surrender even before the monsoon comes.
You can come with your boat if you want to reach your office. #MumbaiRainspic.twitter.com/WlElaaMInb

According to private weather forecaster Skymet, levels of rainfall are likely to increase from the night of July 3, following a weather system forming in the Bay of Bengal that is moving towards the western coast of the country. 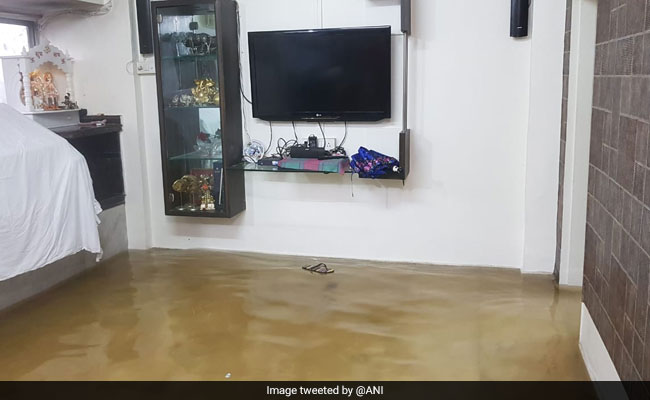 These are corrected help desk numbers for Passenger enquiry due to waterlogging at Palghar station. @WesternRlypic.twitter.com/d4YvatVhSb

(With inputs from ANI, PTI and Reuters)