"Have To Find Job, Get Married": Mumbai Engineer Freed By Pakistan

Relatives, friends and well-wishers greeted and cheered for Hamid Ansari as he came out of the Mumbai airport. 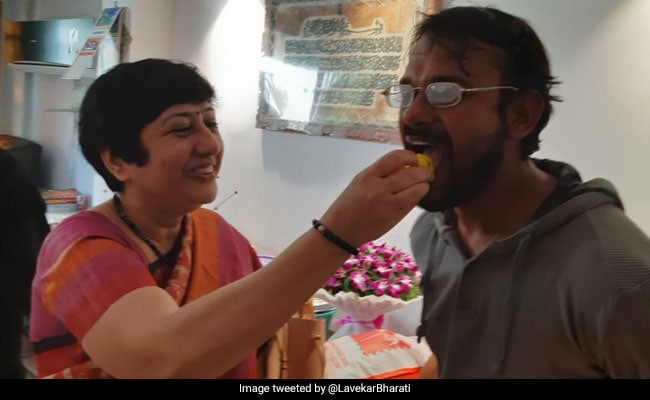 Software engineer Hamid Ansari, who had to spend six years in a Pakistani jail on espionage charges, returned to his hometown Mumbai on Thursday, refusing to "scratch old wounds" and vowing to move on with live.

Upon his arrival at the Mumbai airport to a cheering welcome by friends and relatives, Mr Ansari said he would try to get a job and then find a suitable match for himself.

"I don't want to recollect what happened with me in the past. I want to look at the future," he said. "I have to find a job and after that I also have to find a woman to get married."

Mr Ansari was arrested in Pakistan in 2012 for allegedly entering that country from Afghanistan reportedly to meet a woman he had befriended online. Pakistan slapped espionage charges against him. He was repatriated to India on Tuesday.

Two days after he was handed over to India at the Wagah-Attari border, Hamid Ansari, 33, and his parents left New Delhi in the morning in an Air India flight and arrived at the airport here around 9.30 am, his father Nihal Ansari said.

Relatives, friends and well-wishers greeted and cheered for him as he came out of the airport. The family then left for their residence in suburban Versova.

A really emotional moment , Hamid Ansari returned home from Pakistan jail after 6 years. A big Thanks to our External Affairs Minister @SushmaSwaraj Ji and #BharatSarkar for their efforts to bring him back. Met him & interacted about the difficult phase he has gone through. pic.twitter.com/HaFOztqgLJ

Before leaving for home, Mr Ansari told mediapersons at the airport he did make "mistakes" in the past. "I had my own mistakes but now I want to move towards the future. I don't want to go into those things now, I had my own sins and mistakes."

Mr Ansari said while waiting to cross the border at Amritsar after his release from the Pakistan jail on Tuesday, he caught a glimpse of his parents, who were waiting for him on the Indian side, first time in six years.

"I was not able to meet them (immediately) as I was on the Pakistan side. At that time, I realised how much they must have suffered for me. I wanted to meet them immediately, but could not," Mr Ansari said.

Asked about an eye injury he apparently suffered during interrogation at the Pakistani prison, Mr Ansari said the interrogation process cannot be avoided.

"During the interrogation, the retina of my eye got ruptured. But, they admitted me to a government hospital and it was treated...they compensated for it ( treatment)," he said.

On an alleged attack on him inside the Peshawar prison, he said it was due to a "misunderstanding" which escalated.

Asked about his future plans, the software engineer said first there will be a celebration with the family.  "(then) I have to find a job and after that I also have to find a woman to get married...pehle naukri phir chokri."

The Mumbai resident, who returned to India on Tuesday after crossing the Wagah-Attari border, was imprisoned in the Peshawar Central Jail after being sentenced by a military court on December 15, 2015.

According to official sources, India issued 96 notes verbales to Pakistan seeking consular access to Mr Ansari. The decision to release him was taken due to relentless pressure from New Delhi, they said.

Shortly before his arrival on Tuesday, his mother Fauzia Ansari had told reporters that the prayers of the family and of all those who wished for his safe return were answered. His father had said it was a new dawn for them.

Mr Ansari and his family have thanked External Affairs Minister Sushma Swaraj and her ministry for persisting with the case and taking it up with Islamabad.

His jail term ended on December 15 but he was not able to leave for India as his legal documents were not ready.

On Thursday, the Peshawar High Court gave the Pakistan government a month's time to complete his repatriation process.

Mr Ansari had an emotional interaction with Swaraj on Wednesday as he narrated the difficult phase he had to endure through in Pakistan.