Aryan Khan Bail Hearing Highlights: Aryan Khan was supplied drugs by one of the other men arrested in the cruise ship drug bust, the anti-drugs agency said in court yesterday.

Aryan Khan, son of movie star Shah Rukh Khan, has been denied bail in the Mumbai drugs-on-cruise case and will be spending the weekend in prison. He was sent to judicial custody by the Magistrate's court yesterday. Aryan Khan was supplied drugs by one of the other men arrested in the cruise ship drug bust, the anti-drugs agency said in court yesterday as it argued against the 23-year-old being given bail. On Monday, he was denied bail after his sensational arrest and was sent to the custody of anti-drugs agency Narcotics Control Bureau (NCB) till yesterday by a Mumbai court. 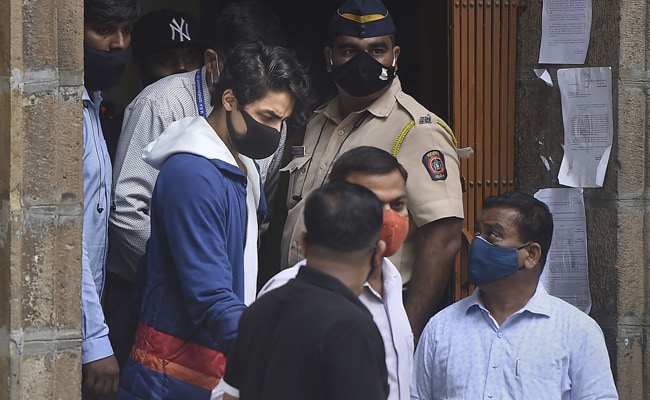 All eight were arrested on Sunday after the anti-drugs agency went undercover and raided a rave party on Saturday evening on the "Cordelia" cruise sailing from Mumbai to Goa.

Oct 08, 2021 17:23 (IST)
Aryan Khan Bail Hearing
The Magistrate court has ruled "non-maintainability" because there are seizures (drugs) in the case (though not from Aryan Khan but from others). Hence, the case can be tried under the Sessions court. While Aryan Khan's lawyer said that nothing has been seized from him but the NCB, citing Rhea Chakraborty's case, argued that the accused cannot be bifurcated based on seizure and no-seizure in a single case.
Oct 08, 2021 17:16 (IST)

"They held me for seven days. Even if they want to say I will tamper with evidence, they should come with a positive case of how I will do it.," he tells the court.

Court: You must argue.

Satish Maneshinde: No material has been found on me or in my bag

Satish Maneshinde: where is the material to prosecute?

Court: It has to be seen if the court is competent or not...we will decide on it.

This has taken the number of arrested persons in the case -- which includes Bollywood actor Shah Rukh Khan's son Aryan Khan -- to 18.

Nigerian national Chinedu Igwe was arrested from suburban Andheri on Wednesday, and 40 tablets of Ecstasy were found from his possession, an NCB official said.

Oct 08, 2021 11:06 (IST)
"BJP Leader's In-Law Freed After Drugs Bust, Proof Friday": NCP Leader
Nationalist Congress Party leader Nawab Malik has said he will release evidence today to show that one of the people detained and later released by the Narcotics Control Bureau or NCB after the Mumbai drugs bust in a cruise ship was the in-law of a BJP leader.

The country's anti-drugs agency has been running a "network" in Mumbai for the last one year "for only and only publicity," Mr Malik told NDTV on Thursday, hours after superstar Shah Rukh Khan's son, Aryan, was taken under judicial custody for a bail hearing in the drugs bust case.

Oct 08, 2021 09:27 (IST)
"My Life is Under Threat In Maharashtra": BJP Worker After Drugs Bust
The involvement of a BJP worker and a private detective in the raid on a cruise ship off the Mumbai coast by India's anti-drugs agency has kicked up a controversy. The Narcotics Control Bureau or NCB conducted the raid on Sunday and arrested eight people, including actor Shah Rukh Khan's son Aryan Khan. The NCB said drugs like ecstasy and cocaine, among others, were found at a party on the cruise ship.

Days later, videos of the raid surfaced online showing the two men escorting those who were detained that night into the NCB office.