Among those on board the Pawan Hans chopper were officials from the Oil and Natural Gas Corporation or ONGC who were headed for the Offshore Development Area in the North Field of Mumbai High. 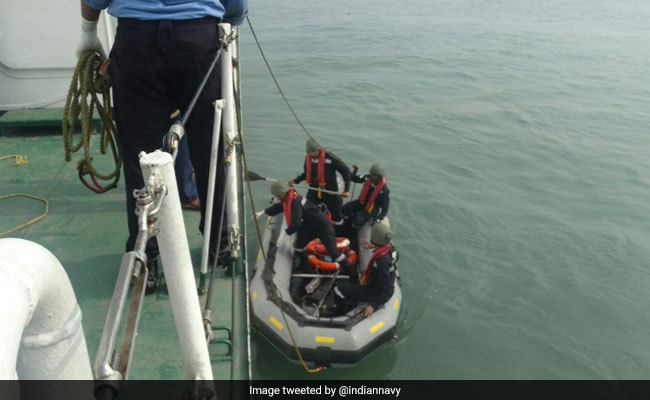 Mumbai Chopper Crash: 5 speedboats and a chopper from ONGC were deployed to conduct search operations

New Delhi: A Pawan Hans helicopter crashed off the Mumbai coast with seven people on board, including two pilots. The helicopter lost contact with the air traffic control today shortly after take-off from Juhu Aerodrome at 10:20 AM this morning. The chopper, Dauphin N3 with registration number VT PWA, last contacted the Air Traffic Control at 10:35 AM when it was about 30 nautical miles off the Mumbai coast. Among those on board were officials from the Oil and Natural Gas Corporation or ONGC who were headed for the Offshore Development Area in the north fields of Mumbai High. The Indian Coast guard has launched a search operation for the helicopter. Choppers and Immediate Support Vessels or ISVs have been deployed. Five speedboats, a merchant vessel and a chopper from ONGC have been deployed to conduct search operations. As of now, a fifth body has been found, according to the Indian Navy spokesperson's official Twitter account and has been brought back on board the ICGS Agrim.

Here are the highlights from the Mumbai Chopper Crash:

In another tweet from the Indian Navy Spokesperson's official Twitter account, bodies that were found are currently being airlifted from ONGC MSV HAL Anant to Juhu.

In a previous tweet, the search and rescue operations included four Indian Navy ships: Teg, Tarasa, T11 and T45. The tweet also says that a Chetak helicopter is being used in search operations.

The official Twitter account of the Indian Navy's Spokesperson has tweeted saying a fifth body has been found and is being brought back on board the ICGS Agrim.
Jan 13, 2018 17:08 (IST)
The Spokesperson of the Indian Navy said in a tweet that the Fast Attack Craft INS Tarasa has joined search and rescue operations. A Boeing P8i from the naval air station INS Rajali at Arrakonam, Tamil Nadu and Seaking 42C from Naval Air station INS Shikra Colaba had also joined in the search operations.
Jan 13, 2018 17:04 (IST)
On Pawan Hans Helicopter crash, ONGC tweets

In another tweet, ONGC said that five speedboats, one merchant navy vessel and one chopper had been deployed for search operations.

ONGC said in yet another tweet that it had pressed its helicopter and speedboats for search operations when the news of the crash had been received by its Helibase Control Room.
Jan 13, 2018 15:46 (IST)
Two bodies identified out of the four recovered, says news agency ANI

According to news agency ANI, the Indian Coast Guard has identified two bodies out of the four that were recovered at sea near the debris of the ONGC helicopter.

Five ships, two Dornier aircraft and two helicopters have been deployed for search and rescue operations.

@indiannavy and @IndiaCoastGuard are extending all possible assistance in the #SAR Search and Rescue of @ONGC_ helicopter and pax on board. Wish for their safety. @DefenceMinIndia@dpradhanbjp

Pawan Hans Helicopter With 7 On Board, Including ONGC Officials, Goes Missing Off Mumbai Coast, Coast Guard Alerted
A Pawan Hans helicopter on duty for ONGC, with seven people on board, has gone missing off the coast of Mumbai."