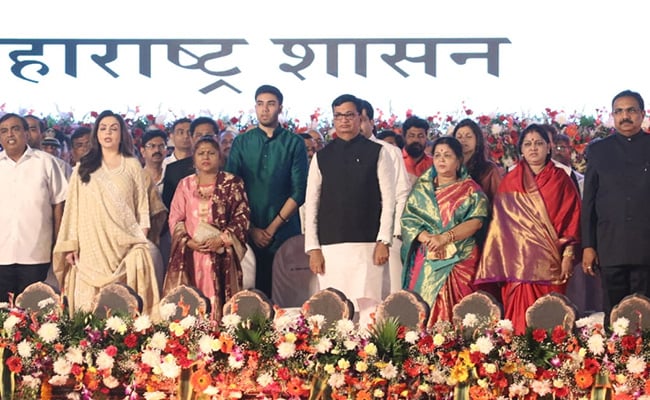 Reliance chairman Mukesh Ambani, his wife Nita Ambani and his son Anant Ambani were among the guests on stage at Mumbai's Shivaji Park this evening where Uddhav Thackeray was sworn in as Chief Minister of Maharashtra. Mr Thackeray, the first member of his family to hold public office, will head a coalition that includes the Nationalist Congress Party and the Congress. The three parties - who have formed the Maha Vikas Aghadi - came together after the BJP-Shiv Sena alliance that fought last month's assembly election fell out over power-sharing.

Dressed in a saffron silk kurta, Uddhav Thackeray prayed before the 'Shivrajyabhishek' - a statue depicting the crowning of Chhatrapati Shivaji Maharaj - before taking oath in Marathi. Mr Thackeray's wife Rashmi Thackeray and son Aaditya Thackeray, who made his political debut last month (he won the election from Worli Assembly seat in Mumbai) joined him on a grand fort-like stage designed by Sena leader and Bollywood art director Nitin Desai.

After the swearing-in ceremony, Mukesh Ambani and Aaditya Thackeray shared a hug.

Shivaji Park, where Uddhav Thackeray took his oath, is an iconic space in Mumbai and the history of the Sena. The party, founded by Mr Thackeray's father, Bal Thackeray, in 1966, held its first public meeting at this sprawling 28-acres space in the city's Dadar (West) area.

Earlier this year Mr Ambani, who is close to Chief Minister Uddhav Thackeray, raised eyebrows by endorsing Congress leader Milind Deora ahead of Lok Sabha polls in Mumbai. That placed him directly opposite to the position taken by his brother, Anil Ambani, who had been relentlessly attacked by Congress president Rahul Gandhi.