Chhatrapati Shivaji Is Inspiration In Preps For Uddhav Thackeray's Oath

The list of invited dignitaries includes Congress's Kamal Nath and Bhupesh Baghel, the Chief Ministers of Madhya Pradesh and Chhattisgarh respectively. DMK leader MK Stalin, Leader of the Opposition in the Tamil Nadu Assembly, will also be present

Uddhav Thackeray will become Chief Minister of Maharashtra this evening

A sea of posters and banners and a massive stage inspired by the historic "Shivrajyabhishek" - the crowning of Chhatrapati Shivaji Maharaj - will greet visitors to Mumbai's Shivaji Park today. The sprawling 28-acre open space in the city's Dadar (west) area is all set to host Uddhav Thackeray's oath-taking ceremony. The Shiv Sena leader will be installed as Chief Minister, at the head of an unlikely alliance with the Nationalist Congress Party (NCP) and the Congress, this evening after a week of high drama and political intrigue in Maharashtra that began with the secretive swearing-in of the BJP's Devendra Fadnavis at 7.50 am on Saturday.

Shivaji Park is sacred space to both Mumbaikars and the Shiv Sena. The ground witnessed rallies during India's freedom struggle, nurtured cricket icons like Sachin Tendulkar and is where Sena leaders cut their political teeth. It is also where the party holds its hugely popular Dussehra rallies every year.

Preparations for the mega event have seen Shiv Sena workers put up posters of Uddhav Thackeray, his son Aaditya Thackeray and other party leaders not just at Shivaji Park but around the city.

The stretch from Dadar TT to Shivaji Park has been decorated with party flags of both the Sena and the Congress, whose unlikely support has helped the Shiv Sena and the NCP keep the BJP from retaining power in one of India's most important states. 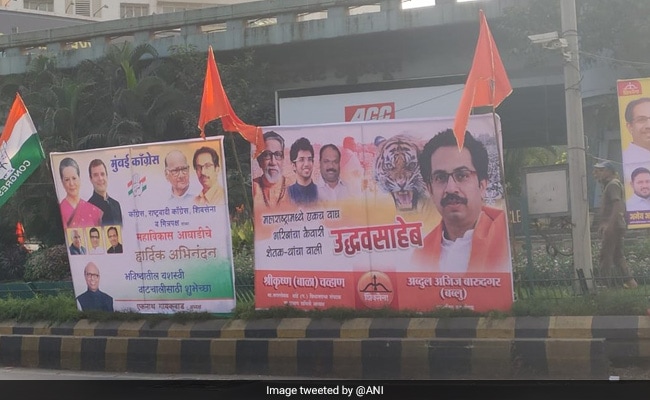 The array of posters that have sprung up in and around Shivaji Park and around Mumbai include one seen near Shiv Sena Bhawan that features Bal Thackeray and former Prime Minister Indira Gandhi. The large poster also includes Uddhav Thackeray and Aaditya Thackeray. 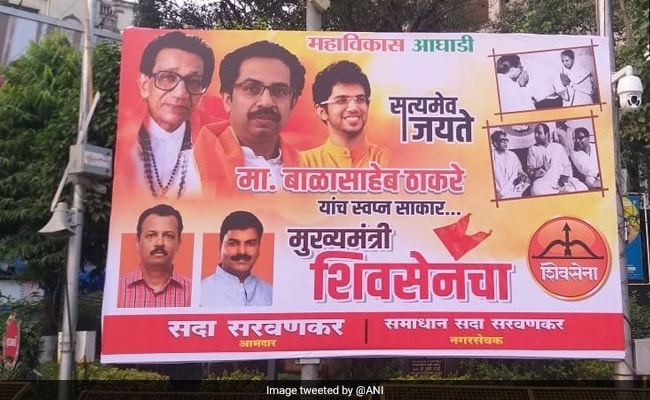 The Sena government that will lead the Maha Vikas Aghadi (the Maharashtra development front) will be supported by the Nationalist Congress Party (NCP) and the Congress, an alliance that took time because of the ideological differences between the Sena and the Congress. All three parties, however, are crucial to the functioning and stability of the new government, a point veteran Congress leader P Chidambaram made yesterday. Today, ahead of Uddhav Thackeray's swearing-in, flags and posters of NCP chief Sharad Pawar and Congress President Sonia Gandhi were visible. 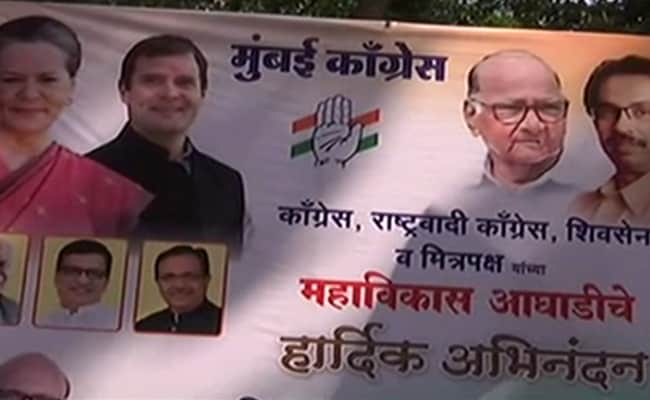 Shivaji Park, a ground that has a deep emotional connect with the 1.7 crore people who call Mumbai home and the Shiv Sena - it is here that the party holds massive Dussehra rallies every year - is also home to a modest memorial dedicated to Bal Thackeray, the party's founder and the man whose political legacy is as influential today as it was in his prime. 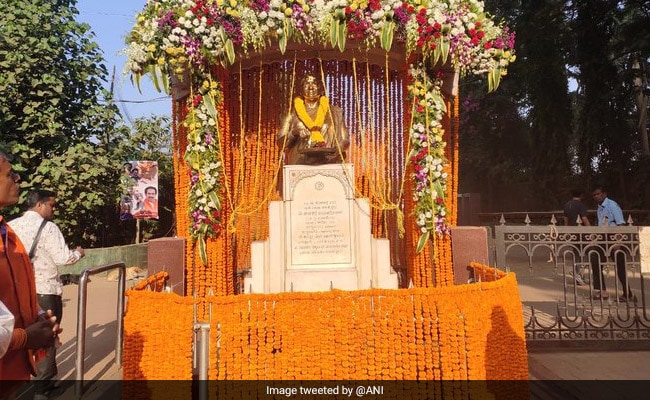 At least 80,000 people are expected to attend Uddhav Thackeray's swearing-in today; a massive stage has been set up against the backdrop of Bal Thackeray's memorial. The stage has been designed by Nitin Desai, himself a Sena leader, who has designed sets for political events and Bollywood films.

The stage measures around 8,000 square feet and has a seating capacity of around 300. 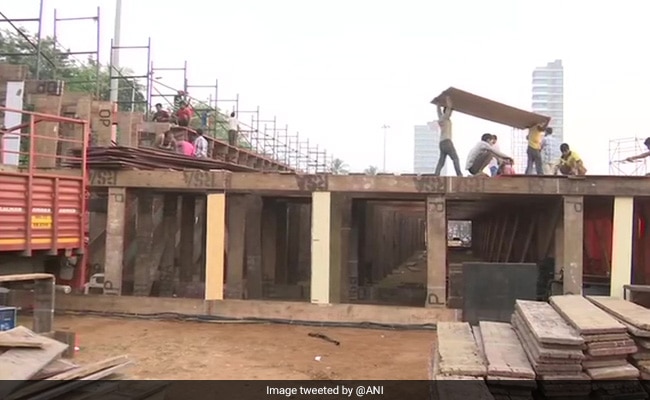 Shivaji Park has been divided into six colour-coded sections, starting with a VIP section on the left side of the enormous stage. Mr Desai's sets, which draw on the legacy of Chhatrapati Shivaji Maharaj, resemble his grand forts. An army of 1,000 workmen and designers have been working since Wednesday evening to ensure all is ready for the grand moment. 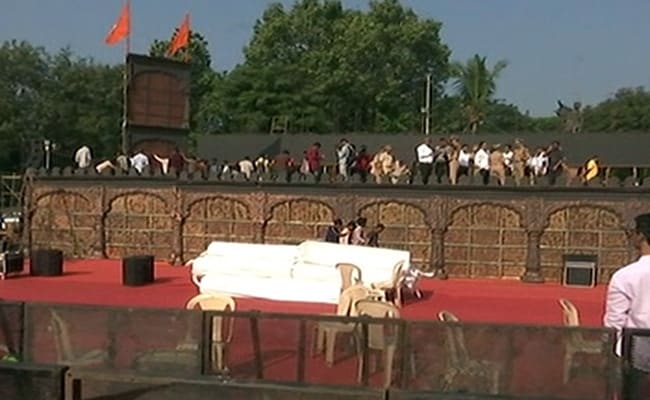 Designed by Sena leader and Bollywood designer Nitin Desai, the stage is more than 300 feet long

"These sets and this stage have been inspired by both Bal Thackeray, whose memorial is on this ground, and by Chhatrapati Shivaji Maharaj. I am happy for the party and for Uddhav Thackeray-ji. He is a good man and a good artist," Mr Desai told NDTV. 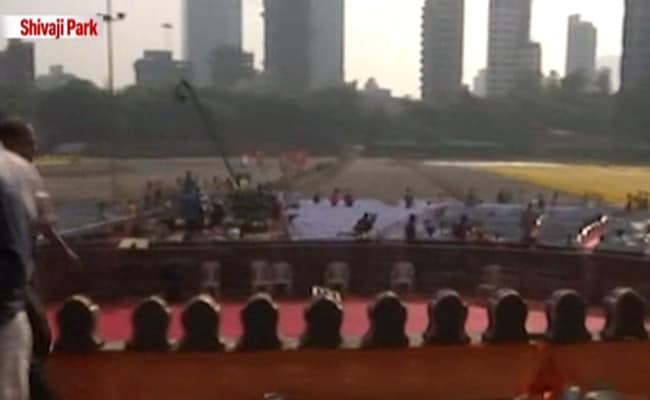 Around 2,000 policemen will be deployed in Shivaji Park. Mumbai Police Commissioner Sanjay Barve led a review of arrangements at the venue this morning. Extra security has also been deployed around Matoshree, the Thackeray family residence and Silver Oaks, the home of NCP chief Sharad Pawar. 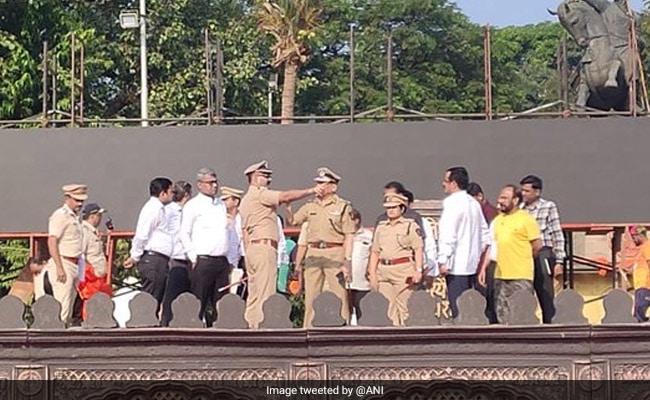 Dog squads will also be on duty, as will police personnel in civil clothes. Drones and CCTV cameras will be used to monitor the crowd. Mumbai Police have implemented massive traffic restrictions in view of the anticipated heavy VVIP movements for the swearing-in ceremony. 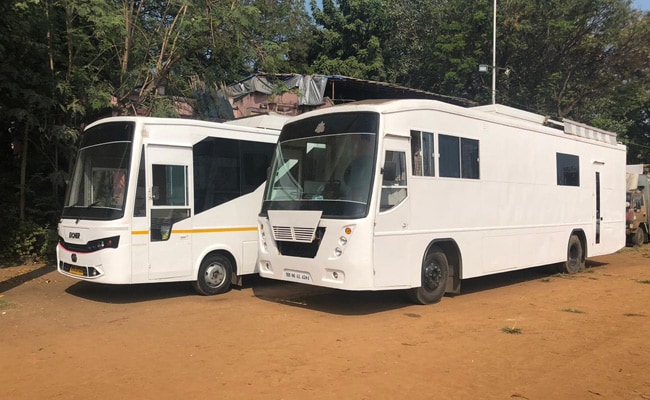 The list of dignitaries who will attend includes the Congress's Kamal Nath and Bhupesh Baghel, the Chief Ministers of Madhya Pradesh and Chhattisgarh respectively. DMK leader MK Stalin, Leader of the Opposition in the Tamil Nadu Assembly, will also be present.

However, Congress leaders Sonia Gandhi and Rahul Gandhi will not be present and neither will Bengal Chief Minister Mamata Banerjee. Prime Minister Narendra Modi and former Prime Minister Manmohan Singh have also been invited, but it is unclear if they will attend.

Uddhav Thackeray being sworn in as the new Chief Minister of Madhya Pradesh, two days after Devendra Fadnavis stepped down, will bring to an end a chaotic 80 hours in Maharashtra.

Mr Fadnavis resigned a day before he was to face a floor test ordered by the Supreme Court. Shortly before he stepped down NCP leader Ajit Pawar, whose overnight support of the BJP precipitated the drama in the state, quit as his deputy.

The BJP, which won 105 seats in the 288-member Maharashtra assembly, needed 40 MLAs to prove a majority. The party had banked on Ajit Pawar to bring in 54 NCP MLAs, but the gamble didn't work; hardly anyone followed "Ajit-Dada" and the "rebels" returned to the NCP over the past four days.