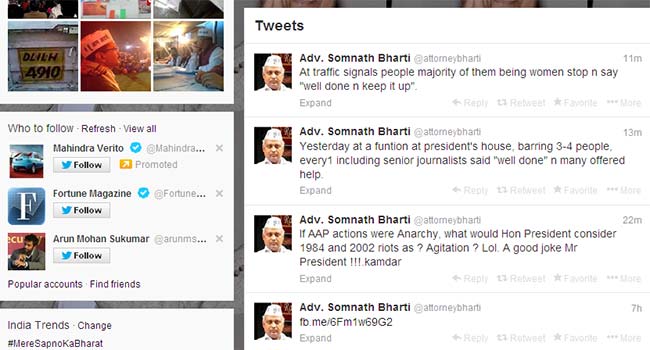 "If AAP actions were Anarchy, what would Hon President consider 1984 and 2002 riots as? Agitation? Lol. A good joke Mr President !!!.kamdar," Mr Bharti tweeted referring to the clashes that have been political millstones for the Congress and BJP.

The minister later denied posting the tweet, which the Congress disapproved of.

"It is not appropriate to comment on (the President's) speech but he has been a statesman and his speech will guide everyone," said Congress leader Mukul Wasnik.

The comment, which vanished from Mr Bharti's twitter page not long after, seemed inspired by filmmaker Shekhar Kapur's tweet on Sunday, "Dear Mr President. Activism n Anarchy r not the same. Anarchy was 1984 when mobs went on rampage killing Sikhs. Provoked by State n Police." Arvind Kejriwal also referred to this tweet when asked to respond to the President's veiled criticism.

Pranab Mukherjee, in his Republic Day address to the nation on Saturday said that "populist anarchy is no substitute for governance," in what was seen as a dig at AAP.

Mr Kejriwal, who attended the President's annual "At-Home" party on Sunday evening, said, "This is one view which was expressed by the President. There should be an open discussion and debate on it. This will also be healthy for our democracy." (Read: AAP plays down President's remarks on 'anarchy')

Promoted
Listen to the latest songs, only on JioSaavn.com
The unusually political statement by the President apparently referred to the Chief Minister's 33-hour protest against the city's police near Delhi's India Gate and Rajpath, the venue of the Republic Day parade. The protest ended with Mr Kejriwal accepting what was seen as a face-saver - the Lieutenant Governor's promise to fast-track action against police officers who had refused to make arrests ordered by AAP ministers including Mr Bharti. (Read: Supreme Court issues notice to Delhi government, Centre over Arvind Kejriwal's protest)

AAP stood by Mr Bharti in the face of strong demands for his removal after his midnight raid two weeks ago, in which he was seen on camera arguing with police officers and ordering them to arrest Africans he accused of trafficking drugs and sex.