Monsoon Session highlights: The Opposition parties are protesting over issues including alleged misuse of central agencies, GST on essential items and inflation. 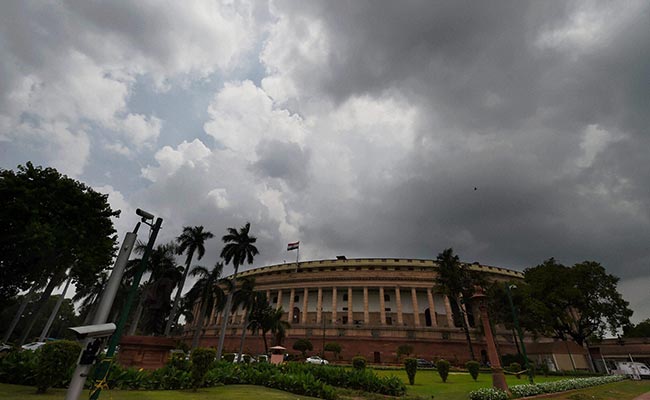 The Monsoon Session convened on July 18 and will conclude on August 12. (File)

The Lok Sabha has been adjourned till 4 pm amid protests by Opposition parties over the alleged misuse of central agencies, like the CBI and Enforcement Directorate. The parties, including Congress, are also protesting over other issues like GST on essential items and inflation.

The Monsoon Session convened on July 18 and will conclude on August 12.

Here are the Highlights on the Monsoon Session:

Get NDTV UpdatesTurn on notifications to receive alerts as this story develops.
Aug 03, 2022 19:44 (IST)
Congress MPs Walk Out Of Rajya Sabha

Congress MPs walked out from the Rajya Sabha towards the end of proceedings on Wednesday after the Chair did not permit party leader Mallikarjun Kharge to raise the issue of alleged police barricading outside the residences here of Sonia and Rahul Gandhi.

While Sports and Youth Affairs Minister Anurag Thakur was replying to the debate on The National Anti-Doping Bill, 2022, Leader of the Opposition and senior Congress member Kharge stood up and said the residences of his party president Sonia Gandhi and former president Rahul Gandhi have been "surrounded by the Delhi Police".

The Personal Data Protection Bill, which sought to regulate how an individual's data can be used by companies and the government, has been withdrawn after a joint parliamentary committee suggested 81 changes to it.

According to government sources, considering the report of the joint parliamentary committee, a comprehensive legal framework is being worked upon that will pave the way for a new bill.
The bill had been sent to the panel in 2019 after it faced vehement protests from the opposition Congress and Trinamool Congress among others who said the data privacy law violated fundamental rights of citizens.
Aug 03, 2022 19:16 (IST)
Parliament Passes Anti-Doping Bill

Parliament on Wednesday passed a bill which seeks to provide a statutory framework for the functioning of the National Anti-Doping Agency and the National Dope Testing Laboratory.

The National Anti-Doping Bill, 2022 was passed by a voice vote in Rajya Sabha. It was cleared by Lok Sabha last week along with certain official amendments.

Sports and Youth Affairs Minister Anurag Thakur while responding to debate on the bill said that currently India can carry out only about 6,000 tests a year, and the law would help in increasing the testing capacity significantly.
Aug 03, 2022 16:45 (IST)
Lok Sabha discusses Central Universities (Amendment) Bill, 2022
The Central Universities (Amendment) Bill 2022, which seeks to create the Gati Shakti Vishwavidyalaya, will generate appropriate human resources to meet the needs of the growing infrastructure of the country, Education Minister Dharmendra Pradhan said on Wednesday.
Setting the stage for a discussion in the Lok Sabha on the bill which aims to build a global standard multi-modal, multi-sectoral academic ecosystem, Pradhan, said the plan is to unify different departments to create a new infrastructure where various transport sector elements -- railway, road, waterways, aviation and port along with IT -- will coordinate with each other on the platform of Gati Shakti Mission.
Aug 03, 2022 15:43 (IST)
657 CAPF personnel committed suicide in 5 years: Government
As many as 657 personnel belonging to the Central Armed Police Forces like the CRPF and BSF died by suicide in the past five years, Union Minister Nityanand Rai said on Wednesday.
The minister of state for home said the Rajya Sabha that 153 personnel died by suicide in 2021, 149 in 2020, 133 in 2019, 97 in 2018 and 125 in 2017.
The Central Armed Police Forces or the paramilitary forces include the CRPF, BSF, CISF, ITBP, SSB, Assam Rifles and the National Security Guard.
The combined strengthen of these forces is around 10 lakh.
Aug 03, 2022 15:06 (IST)
Lok Sabha Adjourned Till 4 PM

Aug 03, 2022 15:03 (IST)
Central Universities (Amendment) Bill, 2022 Taken Up For Passing In Lok Sabha
'The Central Universities (Amendment) Bill, 2022' has been taken up for consideration and passing in the Lok Sabha.
Aug 03, 2022 12:32 (IST)
Rajya Sabha Chairman Disallows Raising The Issue Of Alleged Probe Agency Misuse
The Congress and the Shiv Sena today tried to raise the issue of alleged misuse of central agencies by the government in the Rajya Sabha, but Chairman M Venkaiah Naidu disallowed them from doing so. Leader of the Opposition and senior Congress leader M Mallikarjun Kharge and his colleague Deepender Singh Hooda, Shiv Sena's Priyanka Chaturvedi and AAP's Sanjay Singh and Raghav Chadha gave notices under rule 267 but they were not admitted. "You know my position. These are all notices not worth to be taken up under 267," Mr Naidu said. Rule 267 provides for setting aside the business of the day to take up discussion on the issue being raised in such notice.
Aug 03, 2022 12:30 (IST)
LIVE: Lok Sabha Adjourned Till 2 PM Amid Protests
Lok Sabha has been adjourned till 2 pm amid opposition protests over Enforcement Directorate (ED) raids at the premises of National Herald newspaper. (PTI)
Aug 03, 2022 12:28 (IST)
Energy Conservation (Amendment) Bill, 2022 Introduced In Lok Sabha
The Energy Conservation (Amendment) Bill, 2022 has been introduced in Lok Sabha.
Aug 03, 2022 12:08 (IST)
Congress Decides To Continue Protest Over Alleged Misuse Of Probe Agency
The Congress is set to demand reply in the Lok Sabha from the Finance Minister on the alleged misuse of Enforcement Directorate (ED). The Congress Lok Sabha MPs met today and decided to continue with their protest inside the house.
Aug 03, 2022 12:05 (IST)
Rajya Sabha MP Vaiko Raises Issue Of Chinese Ship Docking In Sri Lanka
Rajya Sabha MP Vaiko raises concern over docking of a Chinese submarine warship in a Sri Lanka port. "Sri Lanka has allowed a Chinese submarine warship to dock at its Hambantota Port despite India's concerns... saying it is only for refilling. It is a research and survey ship which can be used to spy on India's activities and strategic interests. When India is helping Sri Lanka financially, I would urge the government to talk tough with Sri Lanka.  I demand that the minister should make a statement in the House," he said. Rajya Sabha Chairman Venkaiah Naidu agreed and called it a "serious issue".
Aug 03, 2022 11:54 (IST)
AAP MP Gives Zero Hour Notice In Rajya Sabha Over Killing On Sikhs In Afghanistan
Aam Aadmi Party (AAP) MP Harbhajan Singh gave a zero-hour notice in Rajya Sabha today over the attacks on gurudwaras and killings of Sikhs in Afghanistan. He has asked for a zero-session to discuss the issue on day 13 of the ongoing monsoon session of the Rajya Sabha.
Aug 03, 2022 11:40 (IST)
LIVE: Lok Sabha Adjourned Till Noon Over Protests
The Lok Sabha has been adjourned till noon due to protests by Opposition parties over various issues, including the alleged misuse of central agencies.
Aug 03, 2022 11:39 (IST)
LIVE: Central Agencies Being Misused, Alleges Rajya Sabha Leader Of Opposition
Leader of Opposition in the Rajya Sabha, Mallikarjun Kharge today alleged that central agencies like CBI, Enforcement Directorate, and Income Tax department are being misused. "Autonomous bodies like ED, CBI, and Income Tax are being misused. The government is biased against their political rivals. They are trying to topple other democratically elected governments," he said.
Aug 03, 2022 10:24 (IST)