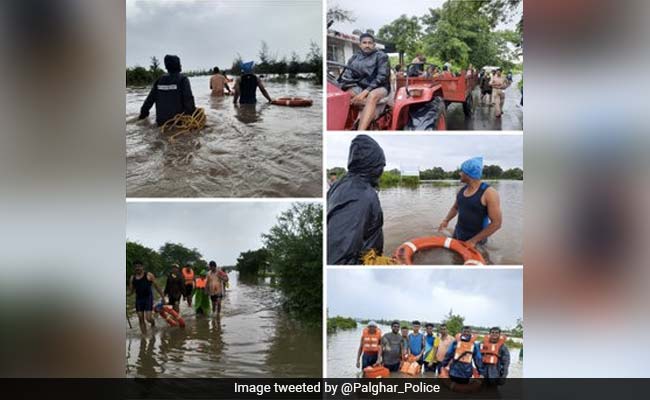 In Maharashtra's Palghar, which is seeing very heavy rain and flood-like situation, 22 people who were stranded have been rescued by the district's police. State Home Minister, Anil Deshmukh, today praised the Palghar Police for saving the lives of the people. On Wednesday, a five-year-old girl, who who clung on to a tree for over four hours was also saved by the police personnel. Mr Deshmukh praised the Palghar police on Twitter.

In Karnataka, a landslide occurred in Kodagu district this morning. A team of National Disaster Response Force has reached the spot and so far there are no reports of any injures.

Karnataka: A landslide occurs near Talacauvery in Kodagu district; a team of National Disaster Response Force has reached the spot pic.twitter.com/DB8efF7OJ9

High tide hit Mumbai amid rain today. Even though the intensity of rainfall has gone down, many places are still waterlogged. The city received the highest rainfall of the season within just 12 hours on Wednesday along with strong winds reaching up to 100 km per hour, according to the civic body.

The Vihar lake, one of the reservoirs supplying water to Mumbai, overflowed last night due to incessant rain in the catchment areas since Tuesday, the Mumbai civic body said. Different parts of Maharashtra faced severe waterlogging and flood-like situation in the last few days.