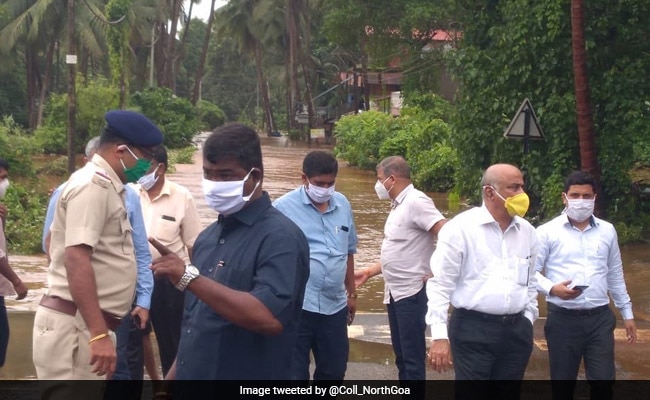 Monsoon 2020: Heavy rain and landslides hit rail and road traffic at several places at the Goa-Karnataka border areas on Wednesday. Villages in the low-lying areas have been inundated. The India Meteorological Department (IMD) has sounded a 'Red' alert for Goa, Gujarat, Konkan and Mumbai for today and tomorrow.

Incessant rain pummeled the coastal state for the fourth consecutive day. A landslide on the Castle Rock (Karnataka) and Vasco da Gama section of the South Western Railway hit rail traffic in the morning, a senior railway officer told news agency Press Trust of India. All passengers travelling by Goa Express to Vasco were stranded at Londa Junction in Karnataka and the railways had to make arrangements to bring them to Vasco by special buses, the officer said.

The Deputy Chief Minister Manohar Ajgaonkar inspected the flood-hit areas in Pernem along with the deputy Collector.

Road traffic from Belagavi in Karnataka to Goa was affected after a landslide at Chorla Ghat on the border in the afternoon. The Chief Minister's office has appealed to people not to travel via Chorla Ghat, as it would take at least six hours to clear the debris.

Heavy rain is expected on Thursday in many states including Kerala, Karnataka, Maharashtra and Odisha, the weather bureau has warned.

This year the rainfall is likely to be normal in the second half of the four-month monsoon season, the IMD has said in its long range forecast for August-September.