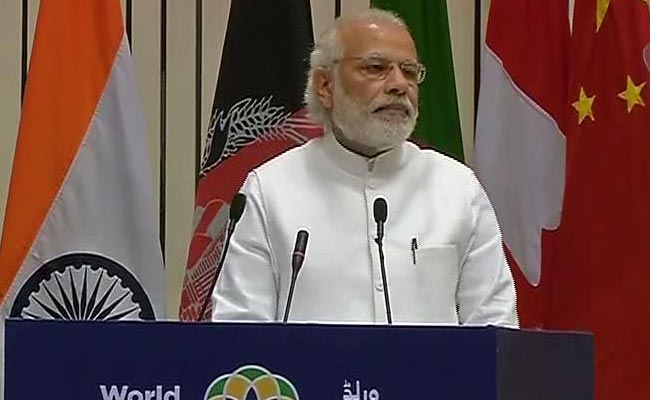 PM Narendra Modi's economic reforms include his aim to turn the nation into a global manufacturing hub. (File Photo)

When Indian Prime Minister Narendra Modi swept into power in 2014, he did so with an ambitious mandate to reboot the economy, stamp out corruption and lure foreign investment by streamlining the country's convoluted regulatory regime.

The leader of the Bharatiya Janata Party won the election by the biggest margin in three decades, and it all seemed to herald a new era for Asia's third-biggest economy.

Now, approaching his second anniversary as premier, Modi's reform ambitions are far from realized. On the plus side, India has eclipsed China as the world's fastest-growing major economy with gross domestic product projected to expand 7.6 percent in the fiscal year through March. Slumping oil prices have helped bring down inflation, improve corporate margins and shore up the current and fiscal accounts.

Modi's opening of sectors such as railways and defense helped draw record foreign direct investment in 2015 during a period when investors were fleeing from emerging markets. Those inflows have helped lift foreign exchange reserves by $47 billion since the end of March 2014 to $350 billion at the end of December. That's enough to cover about eight months of imports, almost triple the amount the International Monetary Fund considers adequate.

"The most important international step Modi has taken for the Indian economy has been his strong signal that India is open for international business," said Alyssa Ayres, a senior fellow at the Council on Foreign Relations.

Red tape is being cut. India's ranking has improved in the World Bank's Ease of Doing Business index, and an Ernst & Young survey found that more than twice as many senior global executives picked India over China as their top investment destination over the next three years.

Modi also aims to turn the nation into a global manufacturing hub. His "Make in India" program and outreach to global leaders has attracted $400 billion-plus worth of overseas investment commitments. If realized, that would be more incoming investment than what has come in during the past 14 years for which data is available. The government hopes to create 100 million new factory jobs by 2022 and increase manufacturing's share of the economy to 25 percent by 2022 from about 18 percent when he took office.

At the same time, other key aspects of Modinomics have come up short. He has shied away from a promise to make it easier to acquire land and the opposition Congress party has repeatedly blocked a goods-and-services tax aimed at creating a single market among India's 1.3 billion people. His government also kept in place powers to retroactively tax companies -- a headache for foreign investors -- and shelved efforts to make labor laws more flexible.

Exports remain weak and bad loans rose to a 14-year high by the end of September, presenting a potential drag on growth as company profits have lagged the pace of economic expansion.

While a poll published last month put his approval rating at an enviable 58 percent, Modi suffered a big setback in November when he lost key elections in the third-most populous, politically-strategic and low-income state of Bihar, prompting him to focus more on boosting farmer incomes in his latest budget. State elections are crucial to his bigger goal of controlling the upper house of parliament, where opposition forces have united to block proposed reforms.

"Mr. Modi's government has failed to use favorable domestic and external circumstances as a springboard for much-needed fundamental reforms to boost productivity and long-term growth," said Eswar Prasad, a former chief of the IMF's China Division and now a professor at Cornell University in Ithaca, New York.

The IMF recently warned that any slowdown in the reform process would hurt growth, fuel inflation and weigh on consumer and investor sentiment. And like China, economists question the veracity of the nation's economic data.

Then there are tensions over religion, caste and free speech that some analysts blame on Modi's strongman approach to governing. "The opposition has consistently found ways to derail its most controversial efforts, but the government too deserves its fair share of blame," said Milan Vaishnav, Senior Associate, South Asia Program, at the Carnegie Endowment for International Peace. "In many ways, the economic world view of the present government is not fully defined."

Still, Modi's agenda remains ambitious. By May of 2018, he's aiming for 100 percent electrification of Indian villages, home to 70 percent of the population. Another goal: Lift India into the ranks of the world's top solar-power-producing nations by 2022 with 100 gigawatts of solar power generation capacity.

"India's economic growth has picked up, a large number of promising initiatives have been launched and India is once again one of the top venues for international investors," said Gareth Price of the Chatham House research institute in London. "At the same time, there remains much to be done if short-term gains are to result in sustained growth."