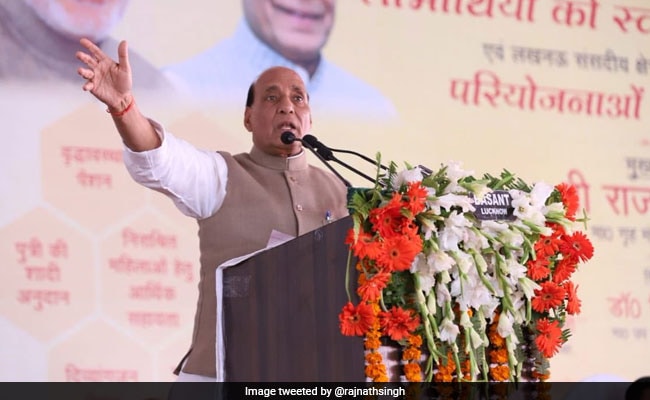 People left out if the ambit of any scheme will get their rights: Rajnath Singh

Union Home Minister Rajnath Singh on Monday said it was the government of Prime Minister Narendra Modi that had, in true sense, implemented the concept of "antyodaya" (benefits reaching the last person in the society), adding that no one had ever imagined that the PM would wash the feet of sanitation workers with his own hands.

Addressing a gathering in Lucknow after handing over certificates to the beneficiaries of various schemes, he said, "You would have never imagined that the prime minister of any country would wash the feet of safai workers with his own hands. Serving the poor is serving the almighty and it is with this feeling that Prime Minister Narendra Modi did this."

Rajnath Singh also said, "We are a firm believer of Antyodaya, which aims at the development and betterment of the person belonging to the last strata of the society. Inspired by this feeling, Prime Minister Narendra Modi is working on this."

The home minister, who is also the Lucknow MP, said in the history of independent India, no government barring the current one had made any policy to benefit those belonging to the last section of the society.

Pointing out that the nation was celebrating the 150th birth anniversary of Mahatma Gandhi, Mr Singh said, "He (Gandhi) had said the government should make policies, which will benefit the last strata of the society. The Central government under Prime Minister Narendra Modi has made such policies."

Referring to the various welfare schemes of the Centre, he said, "I know that if any member of a poor family falls ill, no one musters the courage to hospitalise that person. However, the Ayushman Bharat Yojana has given much relief."

Mr Singh also assured the audience that if any eligible person was left out of the ambit of any scheme, "then we will give them their rights".