HD Kumaraswamy found it condemnable that having procured land from Karnataka for the RAF unit, Kannada was ignored by the Central government. 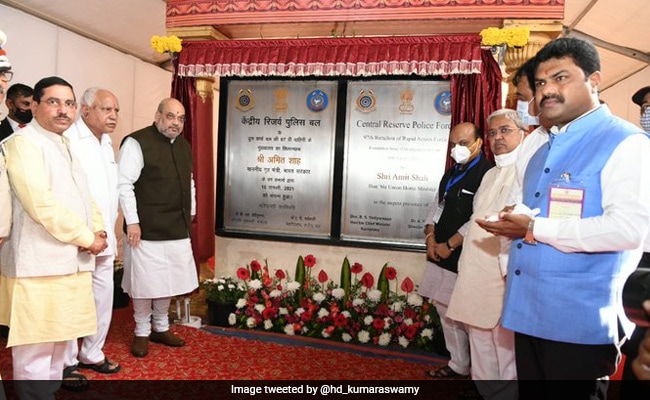 Condemnable that even the Chief Minister was present at the event, says HD Kumaraswamy.

Former Karnataka Chief Minister HD Kumaraswamy today launched a broadside against Union Home Minister Amit Shah and Karnataka's BJP leaders over Kannada not being used on a plaque unveiled at a Rapid Action Force unit's foundation stone-laying ceremony in Shivamogga district. The use of only English and Hindi on the panel was an "insult to the pride of Kannadigas", the JDS leader said.

On a two-day visit to Karnataka, Mr Shah yesterday laid the foundation stone for a campus of a newly-raised battalion of Central Reserve Police Force's Rapid Action Force (RAF) at Bhadravati in Shivamogga. Among other leaders present at the event was state Chief Minister BS Yediyurappa.

"It is the responsibility of the Centre to show due respect towards the languages of the state as our country, which is known for its diversity, has adopted the three-language formula to ensure that the importance of state languages is not undermined," Mr Kumaraswamy alleged on Twitter.

"It is highly condemnable that even the Chief Minister and Deputy Chief Minister who were present on the occasion chose to ignore dignity and honour of our land and its language," he said in a series of tweets.

Mr Kumaraswamy also found it condemnable that having procured land from Karnataka for the establishment of the RAF unit, the state's language itself was ignored by the Central government.

The former Chief Minister said India had adopted the "three-language formula" to ensure that the importance of state languages is not undermined. "But violation of such a sensitive norm by the Union Home Minister himself is an insult to the Kannada language as well as Kannadigas," he said.

Union Home Minister @AmitShah laid the foundation stone for the RAF unit in Bhadravathi of Shivamogga district on Saturday. But the inscription plaque unveiled on the occasion to mark the foundation stone laying is in only Hindi and English. It clearly shows...
1/8 pic.twitter.com/Lr981DhSpB

The BJP is yet to react to his comments.

Mr Kumaraswamy has often in the past taken up the Kannada language's cause or fought against alleged "Hindi imposition" in the context Centre-state ties.

Last August, flaying the AYUSH secretary for allegedly asking non-Hindi participants to leave a training programme, he had asked if it was done with "shameless excitement" to impose Hindi.

Earlier that same month, he had alleged that political leaders from southern India were deprived of opportunities by "Hindi politics and discrimination", preventing many natives of the region from becoming Prime Minister.

Today, he was joined by the Karnataka Rakshana Vedike, a linguistic group based in the state in slamming Union Minister Shah.

"It will be no surprise if in future speaking of Kannada is declared an offence by the emperors (Shah) of Hindi. To warn the people against this, we are asking for a Twitter storm at 5pm today," it said in a tweet composed in Kannada with #NoToHindiSlavery.