Mind the gap between party and govt, warns Sonia Gandhi at Congress summit 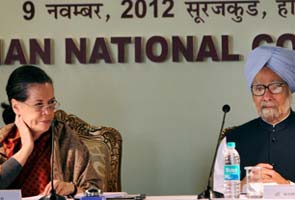 New Delhi: On the outskirts of Delhi, Congress president Sonia Gandhi firmly called her party to order today. In the general elections scheduled for 2014, the Congress will ask voters for a third consecutive shot at government. Mrs Gandhi, who is the president of the party, said the party and the government need to reconcile their differences, ensure that promises made to voters in the last election are delivered, and explain simply and clearly why the economic reforms introduced recently by the Prime Minister are exigently needed. (Track live updates)

Mrs Gandhi and her son, Rahul, surprised the 70 delegates headed to Surajkund for the Congress summit by boarding a bus this morning. Senior ministers are among those attending the brain-storming session at the Hotel Raj Hans, which also hosted the opposition BJP's national executive meeting just a few weeks ago.

Delegates had been told that using their government cars with the 'lal battis' or flashing red beacons which guarantee them right of way were declared off-limits. Two buses were made available instead. Delegates were asked to carry copies of the Congress' 2009 manifesto, an indication that a performance audit and assessment would be high on the agenda of the summit, dubbed the 'Samvad Baithak'.

In her opening remarks, Mrs Gandhi stressed the need to correct a major infirmity- an often-public divide between the party and the government on major policy, like economic reforms. "Sometimes the party is unhappy with decisions taken by the government. Both views have to be balanced," she said, "discussions do happen between the two, but only when really big decisions need to be taken."

The Congress has indicated its discontent with the government's recent decision to limit the supply of discounted cooking gas to families. Party leaders reportedly warned that while reforms would help revive investor confidence in an inert economy, their introduction so close to elections can trip up the party. In Himachal Pradesh, which has just voted, for example, the limit of six discounted gas cylinders per year for households turned into a major campaign issue, one which the opposition plans to flog in the run-up to the general elections.

Mrs Gandhi said it is crucial for the Congress to 'Saaf-saaf' or clearly explain to the public why those reforms were exigently needed. Over the weekend, along with her son and the Prime Minister, she addressed a rally in Delhi to tell a large audience including many farmers, that they must not believe misreports that the recent reforms in retail will hurt them. To her party today, she said, "Our government has taken some tough decisions. It is our job to explain to the people of the country very clearly why these decisions were taken," she said.

Mrs Gandhi, who has been urging her party not to sound defensive while being torpedoed by corruption charges by both the BJP and anti-corruption campaigner Arvind Kejriwal, said, "Our detractors want to grab power at any cost, notwithstanding that their greed would weaken democracy and secular values."

The Congress leadership has shortlisted three key issues - the current political situation, economic challenges and its track record in fulfilling poll promises - as its agenda for the meet.
Comments
Congress summitSonia Gandhi