Mid-day meal milk in Uttar Pradesh's Sonbhadra: The cook is seen giving the milk to waiting students, who mill about her with steel glasses in their hands

Mid-day meal: A cook mixes milk with a bucket of water at a school in Uttar Pradesh's Sonbhadra

A video has emerged from Uttar Pradesh's Sonbhadra that shows a cook of the government's mid-day meal programme mixing a packet of one-litre milk with a bucket of water to feed some 81 students at a local school.

Sonbhadra district is one of the most underdeveloped areas in Uttar Pradesh. Social workers say children from poor families in the district depend on the state-run scheme at government schools for at least one nutritious meal a day.

In the video reportedly taken by a member of the gram panchayat, the cook is seen boiling water in a large aluminium container before adding milk from a one-litre carton. She then stirs the vessel slowly as the mixing is complete.

The cook is seen giving the milk to waiting students, who mill about her with steel glasses in their hands. Turn by turn, they get about half-a-glass of the highly diluted milk.

The government primary school at Sonbhadra district's Chopan has 171 students; 81 turned up at the school on Wednesday when milk was served. 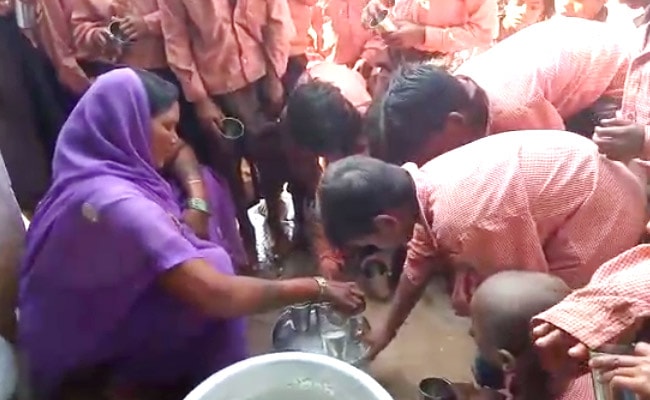 The video surfaced two months after a journalist from Uttar Pradesh was charged by the police after he exposed alleged fraud in mid-day meals served to students. The police alleged the journalist conspired to defame the state government by showing children eating rotis with salt.

The district administration said they immediately ensured more milk was distributed on the same day the incident was reported, adding they are investigating why the right amount of milk was not served to the schoolchildren though enough milk was available in the school.

"I have conducted an inquiry. We use packet milk here because we cannot source milk from cows or buffaloes. But there was enough milk in the school and we later redistributed the milk to the children. The first time there was an error, but it was rectified immediately," block education officer Mukesh Kumar told reporters.

But the cook who distributed milk to the schoolchildren said she was given only one packet of milk. "I diluted one litre of milk with a bucket of water. We were only given a packet of milk yesterday, so that's what I had to do," the cook, Phoolwanti, told reporters.

Jitendra Kumar, a teacher, said, "The cook probably did not know that more milk was available."

A senior education officer, Gorakhnath Patel, said there was not enough milk in the school. "I am being told milk was unavailable, so they were directed by the authorities to mix water in it, in a balanced quantity. I am also being told that teachers had gone to get more milk but meanwhile pictures were clicked and distributed," Mr Patel said, according to news agency ANI. "I am investigating the matter. Action will be taken against the culprits," he added.

"As per action taken reports (ATRs) received from states and UTs (Union Territories), action such as issuing warning against the official responsible, terminating the contract of concerned
NGOs/organisations... have been taken by the concerned state governments and UT administrations," the Union Minister said in a written reply to Lok Sabha.