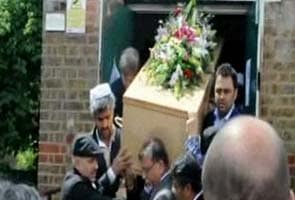 London: The body of India's most acclaimed painter Maqbool Fida Husain was today laid to rest with full Muslim religious rites at Brookwood cemetery in the UK, honouring his last wishes.

Husain was laid to rest at the cemetery, one of the biggest in Europe, at Woking in UK's Surrey.

95-year-old Husain died of lung congestion at the Royal Brompton hospital yesterday. Earlier, the Namaza-e-janaza was performed at Idara-e-Jaaferiya, a funeral Parlour at Tooting, to facilitate the public to pay their last homage to the renowned painter.

His four sons, Shafad, Shamshad, Mustafa and Owais and two daughters Aqeela and Raisa were also present at the burial ground.

Over 50 people were present to pay their respect to the artist, including Lord Ghulam Noon, leading NRI and chairman of Noon Products.

Alan Munnary, the grave digger said the 460-acre graveyard is one of the biggest cemeteries in Europe. Husain had expressed a wish to be buried wherever he breathed his last.

The burial was delayed for an hour because the coffin was too big and a new grave had to be dug. Husain also wanted to be buried under the shade of a tree, family sources said.

India's biggest grosser as a painter with his works fetching astronomical sums in auctions in London and New York, Husain turned away from India in 2006 following a series of legal cases and death threats over his depiction of Hindu goddesses in nude.

Promoted
Listen to the latest songs, only on JioSaavn.com
He accepted Qatari citizenship in 2010 after surrendering his Indian passport.

Husain started his career as a painter of Bollywood posters in the 1920s and later went on to achieve iconic status.