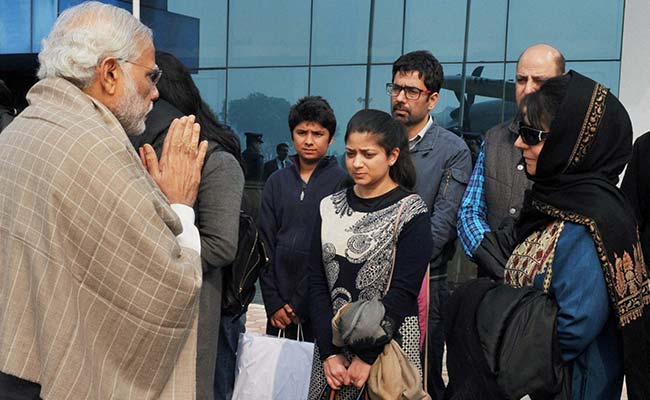 Srinagar: Mehbooba Mufti, the leader of the Peoples Democratic Party, is likely to take oath as the chief minister of Jammu and Kashmir today. Ms Mufti, 56, will be the first woman in the state to occupy that office.

On Thursday, PDP leaders handed a letter to Jammu and Kashmir Governor NN Vohra supporting Mehbooba Mufti as the next chief minister to succeed her father Mufti Mohammad Sayeed, who died on Thursday morning in Delhi after a brief illness.

The PDP's partner, the BJP, has indicated that it will back its choice for chief minister, but needs to send a formal letter of support from Delhi.

"It is for PDP to decide who will be their leader. Our alliance is with the PDP," said BJP Vice President Avinash Rai Khanna, who has charge in the party of Jammu and Kashmir, in Delhi on Thursday.

Mehbooba Mufti has her share of detractors in the state BJP, but sources say the Mufti's sudden death leaves it with little time for negotiations with its ally. In Jammu and Kashmir, which has special status, Governor's Rule is imposed immediately in case a chief minister dies as the post cannot be kept vacant.

Also, the crucial Budget session of the state assembly begins on January 18 and a chief minister must be in place by then.

There had been speculation about an oath ceremony for Mehbooba Mufti on Thursday night, but the BJP's letter of support is crucial.

In state elections held in December 2014, the PDP had won 28 of Jammu and Kashmir's 87 seats, dominating the Kashmir Valley, but fell short of a majority. After weeks of negotiations Mufti Sayeed crafted an unlikely alliance with ideological opposite BJP, helping it share power for the first time in the Muslim majority state.

The BJP placed number 2 in the state with 25 seats, all won in the Jammu region. The National Conference has 15 seats and the Congress 12.

Mehbooba began her political career in 1996, joining the Congress. In 1999, she was by her father's side as he broke away from the Congress and launched the PDP.

Mehbooba is a Lok Sabha MP; she retained her seat south Kashmir seat in 2014.