Dimple Yadav, a two-term MP, lost her Kannauj seat in Uttar Pradesh to the BJP. It was a remarkable upset, given that the constituency has about 3.5 lakh Yadav votes. 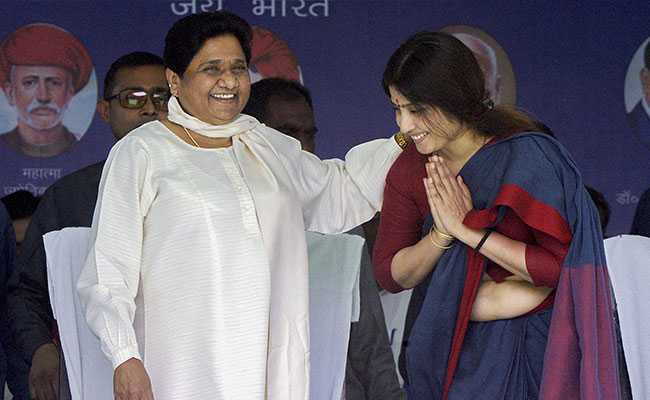 The loss of Kannauj is a huge blow for the Samajwadi Party.

As Mayawati called time on her alliance with rival-turned-partner Akhilesh Yadav at an internal party meeting on Monday, she remarked that the Samajwadi Party chief "couldn't even ensure his wife Dimple Yadav's win".

Dimple Yadav, a two-term MP, lost her Kannauj seat in Uttar Pradesh to the BJP. It was a remarkable upset, given that the constituency has about 3.5 lakh Yadav votes, enough for a Yadav to sail through. The result indicated that the Yadav community, instead of voting en bloc for Dimple Yadav, also backed the BJP candidate.

The loss of Kannauj is a huge blow for the Samajwadi Party. Socialist leader Ram Manohar Lohia had won it in 1967. Akhilesh Yadav's father Mulayam Singh Yadav contested in 1999 and fielded Akhilesh Yadav in 2000. Akhilesh Yadav held the seat till 2012, when he was elected chief minister of Uttar Pradesh. In by-polls after this, Dimple won unopposed.

"Our votes transferred to Dimple but the Yadav votes didn't," Mayawati assessed at a meeting of her Bahujan Samaj Party (BSP).

She noted that the alliance was "bekar (useless)" and said: "Yadav votes were not transferred to us but our votes did go to them. Samajwadi Party won only where Muslims voted heavily for them. Even (Akhilesh Yadav's) own family didn't win the Yadav votes."

Mayawati has decided to contest on her own the bypolls to 11 assembly seats where lawmakers were elected to parliament. This change of policy - the BSP never contests bypolls - is said to be driven by desperation, say sources.

The BSP-SP understanding was, broadly give-and-take between the two former chief ministers. Samajwadi chief Akhilesh Yadav would back Mayawati for Prime Minister and in return, he would get big help from her in returning to power in the state, where he was voted out in 2017.

The Mayawati-Akhilesh gathbandhan (dubbed as the bua-bhatija or aunt-nephew tie-up) came a cropper and ended up with hardly more than dozen seats in 80-seat Uttar Pradesh.

"If Mayawati doesn't exit the alliance now, she will have to help Akhilesh Yadav in the assembly bypolls and the state election in 2022," explained sources.

For now, Akhilesh Yadav is more of a dead weight for Mayawati. Even Samajwadi Party leaders say Yadav votes are shifting because the "era of caste politics is over" and the community wants development.

The Samajwadi Party, meanwhile, has reacted to Mayawati's remarks, saying it was waiting for an official statement.

"No one has got the official stand of the BSP regarding the alliance. We are waiting for an official statement," SP chief spokesperson Rajendra Chaudhary told PTI.