The smashing of Ishwar Chandra Vidyasagar's statue had become an emotive issue in Bengal. Blaming the Trinamool Congress for the vandalism, PM Modi had promised to build bigger, better statue of Vidyasagar, an offer scornfully rejected by Mamata Banerjee. 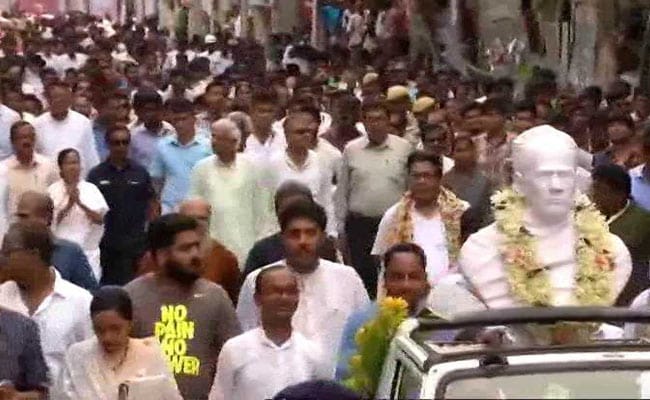 A new bust of Bengal icon Ishwar Chandra Vidyasagar was unveiled today in Kolkata by Mamata Banerjee, almost a month after it was smashed to bits during clashes between Bengal's ruling Trinamool and the BJP in the violent run-up to the national election.

The Chief Minister marched down to the Vidyasagar College with the new bust travelling ahead in an open jeep, to restore the icon's statue to its original spot. A large number of celebrities, poets and writers joined Mamata Banerjee in the march.

"Bengal is being defamed. If you want to save Bengal and its culture come together. A plan is being hatched to turn Bengal into Gujarat. Bengal is not Gujarat," she said at the unveiling, referring to the clashes during and after the national election between workers of the Trinamool Congress and the BJP. She said in the past few days, eight workers of the Trinamool and two of the BJP had been killed in the violence.

The Chief Minister declared that she would die working for the people.

"Kill me if needed. I don't need anything, I work for the people. A lot of people are killed in UP and children die but it does not come out anywhere in the media as it is all controlled by them," she said, targeting the BJP.

The damage to the bust, during clashes that broke out at BJP president Amit Shah's roadshow on May 14, was at the core of a huge political battle just before the last day of voting in Bengal.

Prime Minister Narendra Modi said at a rally two days later that he would build a grand statue of Vidyasagar made of "panch-dhatu" but Mamata Banerjee acerbically said Bengal would build its own. Pointing out that the Modi government couldn't build even a small statue of Lord Ram, she said "Bengal does not beg".

Ten days ago, the state government set up a committee headed by the principal secretary, Home, to investigate who broke the statue.

There has been one arrest in the case till now. BJP worker Rakesh Singh was arrested from the Kolkata airport in a case related to intimidation of police officers a few weeks ago.

He was charged with vandalising the statue and is currently in police custody.

The name of Ishwar Chandra Vidyasagar, a 19th-century reformer who fought for widow remarriage and gave Bengal its alphabet, has sentimental value for the people of the state. Every child in Bengal, they say, grows up with stories of Vidyasagar.

Mamata Banerjee's party argued that only goons from outside who are oblivious of the state's history and heritage, could be capable of damaging a Vidyasagar statue.

The BJP, however, claimed the Trinamool had planned the vandalism to blame it on them and cost them votes.

After an acrimonious campaign, the Trinamool ended up with a sharp drop in its tally from 34 of the state's 42 seats in 2014 to 22. The BJP, which has upped its haul from just two to 18, has vowed to continue its campaign to remove Mamata Banerjee in the 2021 state polls.