Bengal Ministers Bratya Bose and Malay Ghatak will fly to Agartala tomorrow morning in a show of solidarity and to protest the incident. 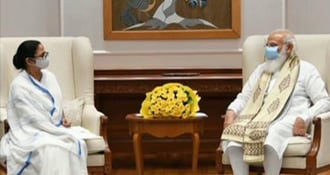 West Bengal Chief Minister Mamata Banerjee today condemned what she said was the "house arrest" of 23 employees of poll strategist Prashant Kishor's organisation IPAC in Tripura and is sending two senior ministers of her government to capital Agartala tomorrow to protest against their confinement at a hotel since Monday morning.

"Look at what they are doing to our boys," Ms Banerjee said in her media interaction outside the Prime Minister's residence in Delhi this afternoon. "They have also raided Dainik Bhaskar. This is just not done," she added

Even Tripura's former chief minister Manik Sarkar condemned the police action against IPAC today. "The IPAC team is here for some information. It is their democratic right. But there is total lawlessness and jungle raj here. They have not been allowed to work. This is a reflection of the BJP government's fear as they are distanced from the people," Mr Sarkar said.

Bengal Education Minister Bratya Bose as well as Malay Ghatak, state minister for judicial affairs, will fly to Agartala tomorrow morning in a show of solidarity and to protest the incident. The Trinamool held protests in Agartala today.. "The situation there is very tense," Mr Bose said.

BJP's spokesperson in Bengal Samik Bhattacharya said, "Why is the Chief Minister concerned about employees of an agency that has gone to Tripura? In any case, Trinamool went to Tripura in the past but were rejected by the people there."

The IPAC team of 23 members went to Agartala last week to survey the Trinamool's prospects in the state. Over the weekend, they did not leave their hotel as a statewide Covid curfew was in place. When they tried to step out on Monday morning, they found the lobby of the hotel full of policemen who said they cannot go outside.

No clear reason was given to the IPAC team on Monday. Late evening, the Superintendent of Police of West Tripura district Manik Das said results of the RT-PCR tests on the IPAC members are awaited.  "They had said they were here for some research related work. That is also being investigated. After getting the Covid test results and the outcome of the probe, the decision will be taken on their release," Mr Das said. Late on Tuesday, all 23 team members tested negative for the Covid infection.

IPAC sources said its team in Tripura was being harassed for no reason other than that they were working with the Trinamool Congress.