The Chief Minister joined a group of tribal dancers in West Bengal's Falakata area, at a government-organised mass wedding. 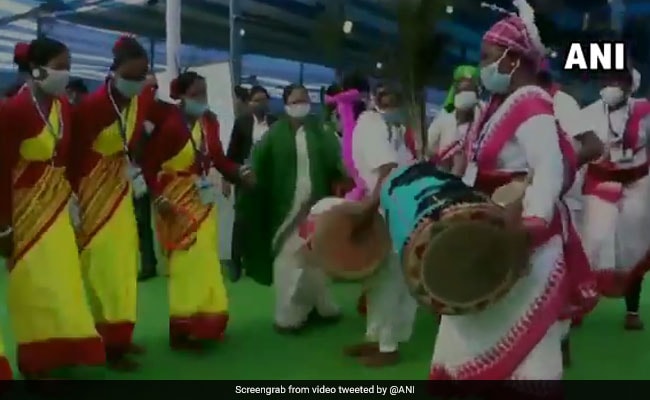 Mamata Banerjee, fighting an exodus of Trinamool Congress leaders who are joining the BJP in the run-up to the Bengal election, attended a mass wedding today and was seen dancing with tribals. Ms. Banerjee says those leaving the party are doing so because they have to save their ill-gotten wealth and their exit won't affect the party's performance.

The Chief Minister joined a group of tribal dancers in West Bengal's Falakata area, at a government-organised mass wedding. She also handed over housing certificates to tea garden workers just a day after Union Finance Minister Nirmala Sitharaman announced a Rs 1,000-crore package for tea gardens in the union Budget.

Ms Banerjee hit out at the Centre, accusing it of making tall promises when it came to tea gardens, but not doing anything. The Chief Minister handed over 4,000 housing certificates to beneficiaries of a state government scheme to improve the conditions at tea garden for workers.

"We don't announce things and not do it. We announced this in our last budget. Today we are handing over allotment letters. This is the Trinamool Congress government. This is the Maa, Maati, Manush (Mother, Land and People) government. Delhi remembers tea gardens during elections. They say we will reopen tea gardens  And then after the elections, they forget tea gardens and leave," she said.

"We have increased wages for tea garden workers from Rs 67 to Rs 202. We have done this. BJP is only spreading canards. They have MPs in North Bengal. Have they done anything? They have done nothing. They promised to reopen seven tea gardens during the Lok Sabha elections but did nothing. We reopened nine tea gardens. We are looking at the rest too if we can do something," she added.

Tea gardens are an important constituency in states like West Bengal, especially North Bengal and Assam, where polls are due by May.

For Mamata Banerjee, every outreach is critical as she confronts an aggressive campaign by the BJP to defeat her in polls just months away.

This morning, she lost another MLA to the BJP, adding to the list of 18 who have left the Trinamool Congress over the past few months.

Two-time MLA Dipak Haldar who was sidelined earlier quit the party, accusing the Trinamool Congress leadership of not allowing him to work for the masses. He is said to be close to Sovan Chattopadhyay, who joined the BJP earlier.