Mamallapuram Summit: President Xi Jinping and PM Modi today kicked off the informal summit at Mamallapuram with a tour of some of the area's heritage sites. 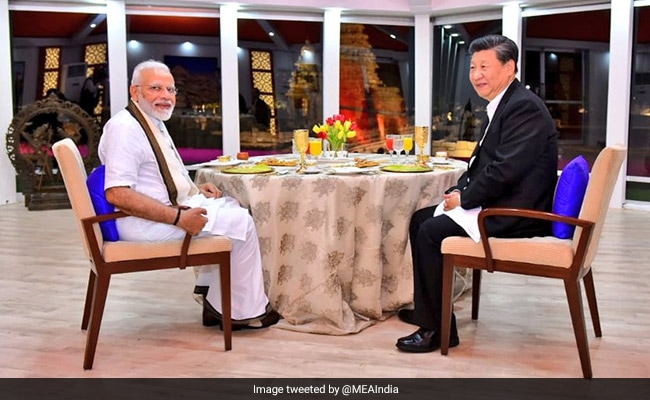 President Xi Jinping, on his two-day visit for an informal summit in India at Tamil Nadu's Mamallapuram, was treated to a lavish spread from Prime Minister Narendra Modi. The non-vegetarian menu of the dinner hosted by PM Modi consisted of lip-smacking delicacies from southern states such as the Tanjavur Kozhi Curry, a chicken curry from Tamil Nadu's Tanjore and the Malabar lobster, a kind of spiny lobster cooked in spices from Kerala, reported news agency ANI.

Among many other dishes, was the Karuvepillai Meen Varuval, a griddle-cooked curry leaf flavoured fish, the Yerachi Ghetti Kozhambu, mutton cubes cooked with spices and coriander, Mamsam biryani, a type of biryani made with long-grain rice cooked with tender lamb and Thakkali Rasam, cooked with spiced extract of tomatoes.

But this was not all that President Xi was treated to.

For dessert, three palate-cleansers were served, including Ada Pradhaman, rice palettes cooked with jaggery and coconut milk, Kavanarasi Halwa, a pudding made with black rice and Mukkani ice cream, a southern specialty ice cream, said the menu, which was tweeted by ANI.

President Xi Jinping and PM Modi today kicked off the informal summit at Mamallapuram with a tour of some of the area's heritage sites.

Dressed in a white half-sleeved shirt, a veshti and an angavastram, PM Modi gave a warm welcome to President Xi Jinping and gave him a tour of the ancient rock monuments, Arjuna's Penance, Panch Rathas and the Shore Temple.

PM Modi explained the significance of Arjuna's Penance, a 73-foot monument, which depicts the story from the Mahabharata, on how Arjuna, a Pandava brother performed severe austerities in order to obtain Shiva's weapon.

The two leaders will hold an informal meet today at the Taj Fisherman's Cove Resort & Spa, followed by delegation-level talks.