Mallikarjun Kharge's long speech has curtailed the time of other speakers from the party including Anand Sharma and sources said he may not speak during the debate. 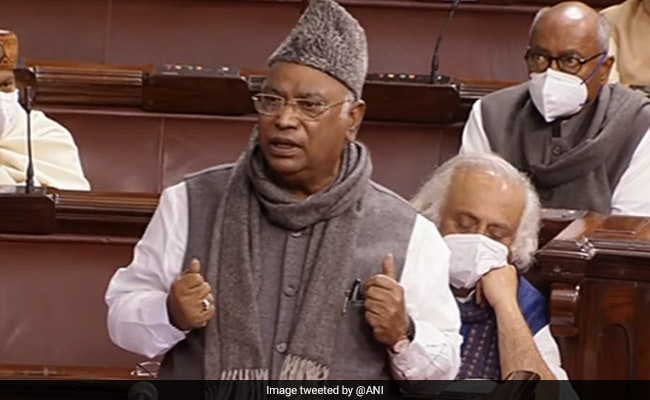 At the end of his speech, Mr Kharge urged the chair to extend time allotted to the party.

Congress leader in Rajya Sabha Mallikarjun Kharge spoke for more than an hour in Rajya Sabha on Wednesday during the debate on the motion of thanks to the President's Address even as the Chair repeatedly reminded him that there were more speakers from his party and the party had a limited time.

Mr Kharge's long speech has curtailed the time of other speakers from the party including Anand Sharma and sources said he may not speak during the debate.

Deputy Chairman Harivansh, who was in the Chair, repeatedly reminded Mr Kharge, who is Leader of Opposition in the House, that there were more speakers from Congress.

Mr Kharge at one point said he determines the debate participation time of the members from his party.

Sources said Congress has been allotted 109 minutes to participate in the debate and six members from the party including Anand Sharma, Digvijay Singh, Ripun Bora apart from Kharge.

Sources said Mr Kharge had been allotted 30 minutes while Mr Sharma, who is deputy leader of the party in the House was allotted 25 minutes.

Mr Kharge taking the majority of the party's time has created some unease in sections of the party and apparently miffed Mr Sharma. The sources said party chief Sonia Gandhi had said that party's parliamentary strategy group meeting that all senior leaders of the party should get adequate time to speak and express their views during debates.

"She said that it is being observed that floor leaders take most of the time allotted to the party to speak on a subject. She said this in presence of Adhir Ranjan Chaudhry and spoke in general terms also," a source said.

The development is also being linked to Mr Sharma being a member of the group of 23 leaders who had written to party chief Sonia Gandhi last year calling for sweeping reforms in the party including elections at various levels.

However, a senior leader who is an office-bearer in Congress parliamentary party, sought to play down Mr Kharge taking most of the party's time and said "it is not a new thing".

He said this has happened earlier too when the party had a different leader in the House.

Mr Kharge, who is the Leader of Opposition in the Rajya Sabha, attacked the government during his speech on several issues including price rise and unemployment.

At the end of his speech, Mr Kharge urged the chair to extend time allotted to the party.