An Indian Air Force (IAF) delegation had visited Russia for the International Aviation and Space Salon MAKS 2019 air show that was held at the Zukhovski International Airport near Moscow between August 27 and 29. 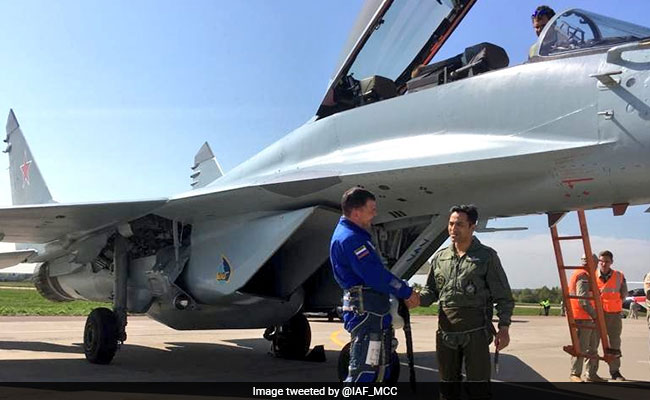 Pilots of the Indian Air Force (IAF) conducted test flights of the MiG 35 fighter aircraft during an ongoing air exhibition in Zukhovski, Russia.

An Indian Air Force (IAF) delegation had visited Russia for the International Aviation and Space Salon MAKS 2019 air show that was held at the Zukhovski International Airport near Moscow between August 27 and 29.

The delegation was also shown the Sukhoi 57E, the export version of the fifth-generation Russian supersonic stealth jet fighter at the air exhibition.

The MiG-35 is a 4++ generation Mikoyan multi-role combat aircraft that comes in single- and twin-seater versions too. Officials said the MiG 35 as well as the Sukhoi 57E were entirely new version of the aircraft.

In July, the IAF Chief BS Dhanoa had inspected the MiG-35 during his Russia visit.

BS Dhanoa had clarified that the IAF would select a new jet only after following the due process of tender, evaluation and test flights. The MiG-35 has a sturdier frame, is fitted with an Active Electronically Scanned Array radar and has been fitted with state-of-the-art latest Russian missile weapons.

Sources said the fighter jets were shown at the airs show to attract new customers as well as those already using Russian fighter aircraft.

It is also being speculated that Russia might offer a sale of the aircraft to India during Prime Minister Narendra Modi's visit to the country next week. PM Modi and Russian President Vladimir Putin are scheduled to meet in Vladivostok.

"The sorties flown by the IAF pilots were regular test flights during the air exhibition. It is not yet clear if India will purchase the aircraft from Russia," an IAF official told IANS.