In 2009, Major DP Singh became the first amputee marathon runner of India. Two years later, the Army provided him with a blade prosthetic, the first one imported into the country. 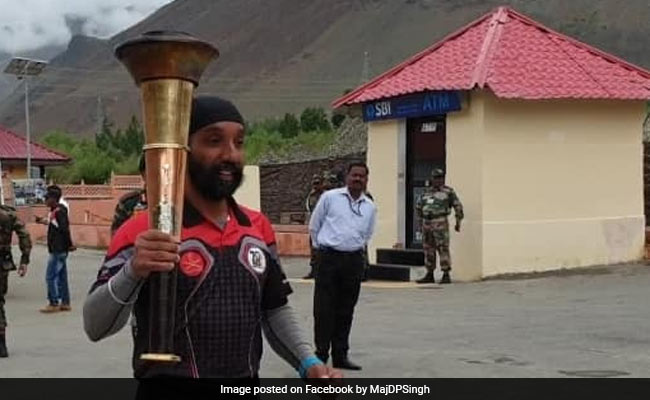 Major Devender Pal Singh was 25 at the time of the Kargil War.

Kargil hero Major Devender Pal Singh, who was left with an amputated leg after the conflict, ran the last lap with the Victory Flame in Drass sector of Jammu and Kashmir on Friday on the occasion of Vijay Diwas.

Major Singh was the target of a Pakistani mortar bomb during the Kargil war.

The flame he carried was flagged off by Home Minister Rajnath Singh from Delhi on July 14.

Major Singh, commissioned into the Indian Army in December 1997 after graduating from the Indian Military Academy, was barely 25 years old at the time of the Kargil war when Pakistani troops and terrorists stealthily captured strategic heights on the border.

Notwithstanding the permanent disabilities suffered in combat, Major Singh, known as the 'bladerunner' in the Army, has run 26 half marathons and a full marathon since then.

Major Singh was with the 7 Dogra Regiment and had joined the unit in May 1999 at a time when hostilities were escalating between India and Pakistan over intrusions across the border. His unit had moved to the Line of Control (LoC) in Akhnoor area in July.

Speaking to IANS from Drass on Friday, Major Singh vividly recalled the incidents on July 15, 1999, the day he was injured.

"I was commanding a post near the LoC where there was regular interaction with the enemy with weapons. There were 30 soldiers under my command. On July 13, there was a lull in firing from the enemy. Two days later, the firing resumed. Two mortar bombs were fired as if they were specifically targeted at me when I was outside a bunker. The first bomb went past me missing me narrowly. The second landed right next to me," said Singh.

None of the other soldiers in Singh's unit were injured. He found himself in a hospital in Akhnoor when he regained senses. Doctors at the hospital had declared him dead upon arrival.

"However, an anaesthesiologist refused to give up on me. He alone revived me. I couldn't even get to know the name of this doctor who saved my life. I managed to track him 20 years later after a fervent search and got to talk to him only 15 days ago. This doctor, Colonel Rajinder Singh, is now based in California after retirement," he said.

Major Singh was hospitalized for nearly one year during which he underwent a series of surgeries. His right leg from knee onwards was amputated, he suffered partial hearing loss in both his ears and his intestines were partially removed.

In 2009, Major Singh became the first amputee marathon runner of India. Two years later, the Indian Army provided him with a blade prosthetic, the first one imported into the country, in order to help him pursue his dreams.

Major Singh has run three of his long-distance races in high-altitude Leh at an elevation of around 11,500 feet.

Recently, he has taken to skydiving. He is a free-lance motivational speaker based in Gurgaon and runs an organisation called 'The Challenging One' in which he enables amputees from various walks of life to lead active life. His graphic novel, "Grit: The Major Story", is set to be released this August.