"We Heard A Loud Bang, A Portion Of Majerhat Bridge Caved In": Eyewitness

Majerhat bridge, which is on the arterial Diamond Harbour Road in the crowded Alipore area, connects the city centre with the heavily populated Behala, the vast area of the south west suburbs and adjacent South 24 Paraganas district. 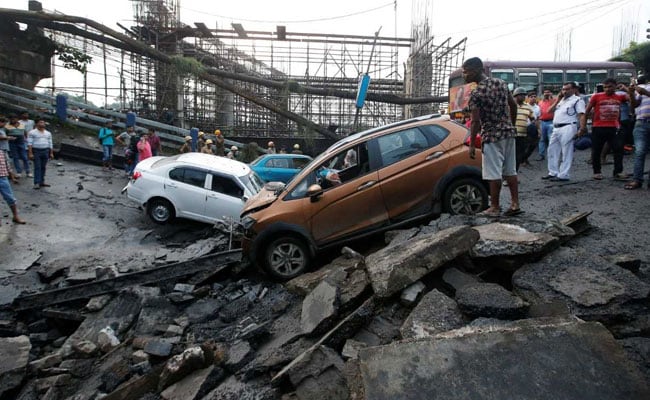 Majerhat Bridge Collapse: An eyewitness said it had collapsed on the canal flowing under it (Reuters)

We were working nearby and suddenly heard a loud sound. We then saw a portion of the bridge collapsing, says a labourer engaged in metro railway work who witnessed the collapse of the Majerhat bridge on Tuesday.

The over 50-year-old bridge on the arterial Diamond Harbour Road in the crowded Alipore area connects the city centre with the heavily populated Behala, the vast area of the south west suburbs and adjacent South 24 Paraganas district.

The road bridge runs over the Majerhat Railway Station on the Sealdah-Budge Budge line during the evening rush hour.

"It was around 4.45 pm. We saw a mini bus, cars and bikes coming down with the collapsed bridge. We went running to the spot," the labourer said.

Another eyewitness said the bridge had luckily collapsed on the canal flowing under it.

"Had it collapsed on the railway tracks, a major disaster could have occurred if a train arrived at that time," he said.

In a while, the area was filled with personnel from the fire brigade, police and National Disaster Response Force (NDRF) who began the rescue work. Locals too chipped in, eye witnesses said.

Huge cranes, iron cutters and drills were brought in to remove tonnes of debris.

A mini bus, four cars and a few motorbikes damaged by the accident, lay at the site as the rescue workers made efforts to bring out the injured from the vehicles.

A taxi driver who had a miraculous escape said he somehow managed to halt his vehicle as the bridge collapsed.

"I thank God. I do not know what would have happened if my vehicle had got into it," he said.

As the evening turned into night, the rescue work continued amidst occasional rain. Power supply was restored to electric poles and additional lighting arrangements were made to facilitate the fire brigade personnel who made tireless efforts to reach underneath the collapsed concrete to reach those still feared trapped.

"We are drilling on one side of the collapsed concrete to find out whether anyone is trapped under it," a fire brigade official said.

He said they were also trying to rescue two persons who were inside a small room under the bridge.

To trace any trapped person, the NDRF has pressed sniffer dogs into service and brought in sophisticated equipment and cameras.

The nearby areas had been dug up for the metro railway construction work and construction material are strewn all over the place.

The entire area has been cordoned off by the police as curious onlookers thronged the place.

A student, Prantika Goswami, who was in a mini bus during the collapse was injured and taken to the hospital.

"We were contacted by some persons who asked us to rush to the spot immediately. We then took her to the SSKM hospital," said one of her relatives.

Ozone Becoming More Widespread In Delhi-NCR Across All Seasons: Study