Flood updates: In Kerala, where at least 67 deaths have died in three days, several people are still fear trapped in Malappuram and Wayanad where massive landslides were reported. 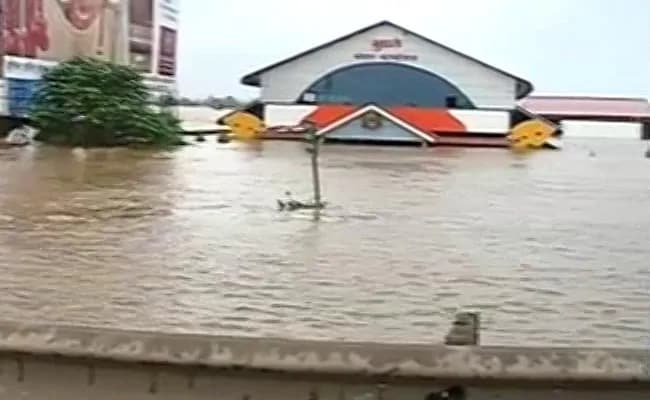 More than 200 rescue teams have been deployed across the country. (File)

More than 100 people have died with heavy monsoon rains triggering floods in different parts of the country in the last one week. Maharashtra, Karnataka and Kerala are the worst-hit states where lakhs have been forced out of their homes. Over 200 rescue teams are on the job to ensure aid to the flood-affected, centre said on Friday.

In Kerala, where at least 67 deaths have died in three days, several people are still fear trapped in Malappuram and Wayanad where massive landslides were reported. Congress leader Rahul Gandhi will represent his parliamentary constituency, Wayanad, today, two days after he urged Prime Minister Narendra Modi to ensure help.

Karnataka Chief Minister BS Yeddiyurappa has estimated the losses in the state due to floods at Rs 6,000 crore.

Here are the updates of floods from Maharashtra, Kerala, and Karnataka:

Amit Shah Surveys Flood-Hit Karnataka Amid Calls For Cabinet Formation
Home Minister Amit Shah on Sunday conducted an aerial survey of the areas in northern Karnataka devastated by floods. Mr Shah's visit comes as the state government draws criticism from opposition parties for its failure to form a cabinet, more than two weeks after Chief Minister BS Yediyurappa was sworn in.
Aug 11, 2019 15:45 (IST)

Indian Air Force: Mi-17 rescued 6 people stranded near Narayanpur Dam, Raichur district, Karnataka. A pregnant woman in need of medical aid was attended to by an IAF medical officer on-board the helicopter and later transferred to a hospital on landing. 1/2 #KarnatakaFloodspic.twitter.com/C8swyMg1gh

Uttarakhand: Thal-Munsiyari Road near Banik in Pithoragarh has been shut after boulders & debris blocked the road following heavy rainfall in the region. pic.twitter.com/JKLvriDaSI

There should not be any politics in this distress situation. It will be very difficult for @BSYBJP to act alone & is quite impossible to ensure justice in all the departments. I urge him to immediately form the cabinet & make ministers in-charge for each district.
n/n

Kerala: Flight operations from the Kochi international airport have been resumed. pic.twitter.com/pQX8cipUdf

For the next few days I will be based in my Lok Sabha constituency, #Wayanad that has been ravaged by floods. I will be visiting relief camps across Wayanad and reviewing relief measures with District & State officials.

Aug 11, 2019 11:19 (IST)
Abu Dhabi- Kochi Indigo will be the first flight to land at today 12 noon.
Aug 11, 2019 11:18 (IST)
Maharashtra Congress demands the government to declare L3 disaster situation in Kolhapur, Sangli and other places. L3 disaster is declared when state doesn't have the capacity to fight the disaster and require more assistance.
Aug 11, 2019 10:11 (IST)
Heading To Belagavi, Tweets BS Yeddiyurappa
"Heading to Belagavi for an aerial survey of the flood affected areas along with Hon'ble @HMOIndia, Shri @AmitShah ji. Will be conducting a meeting with the senior officials to evaluate rescue & rehabilitation measures," Mr Yeddiyurappa tweeted today.
Aug 11, 2019 09:40 (IST)
Heavy Rainfall Alert Issued For Gujarat, Tamil Nadu
The India Meteorological Department or the IMD today said that isolated places over Saurashtra, Kutch, ghat areas of Tamil Nadu, Kerala, Mahe and Coastal and South Interior Karnataka are likely to receive very heavy rainfall on Sunday, news agency ANI reported
Aug 11, 2019 09:33 (IST)
Train services have been disrupted in Kerala due to flooding

Due to flooding, land slides and trees & boulders falling on railway tracks caused by heavy rains, and consequent disruption of rail traffic, following changes have been made in train services in #Kerala. pic.twitter.com/QU44G6Kn2O

Aug 11, 2019 08:56 (IST)
Amit Shah To Conduct An Aeriel Survey Of Belgavi
Union Home Minister Amit Shah will conduct an aerial survey in Karnataka's Belgavi today. Belgavi is one of the worst-hit districts in Karnataka due to floods.