The memorial has statues of Mahatma Gandhi and 80 Satyagrahis who had marched with him during the historic Dandi Salt March, an official release said 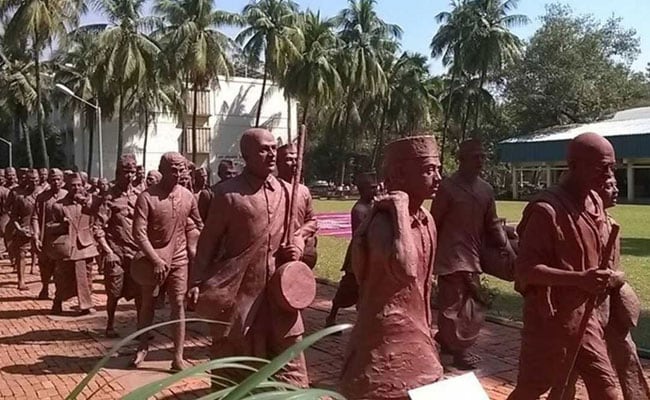 Prime Minister Narendra Modi dedicated to the nation the National Salt Satyagraha Memorial at Dandi in Gujarat on Mahatma Gandhi's death anniversary today. The memorial is a tribute to the 80 marchers who accompanied Mahatma Gandhi from Sabarmati to Dandi in 1930.

The memorial in Navsari district "has statues of Mahatma Gandhi and 80 Satyagrahis who had marched with him during the historic Dandi Salt March. It also has 24-narrative murals depicting various events and stories from the historic 1930 Salt March," an official release said.

The 24-day Salt March led by Mahatma Gandhi began on March 12, 1930 and continued till April 6, 1930. Not only did it get national and international recognition, it also  shook the Britishers with its non-violent nature.

During that period, Indians were prohibited by the British from collecting or selling salt. Indians were also forced to buy the staple diet ingredient from the British, who, not only exercised monopoly over its manufacture and sale but also levied a heavy salt tax. The Salt March was a collective beginning of a mass resistance movement against the British tyranny.

The Salt March initially began with around 80 people, but as more and more people joined in for the 390 km-long journey, it grew into a strong force of 50,000 people.