The charkha, which symbolises Mahatma Gandhi's dream of Swadeshi (self sufficing and self reliance), is made of 1,250 kg of used plastic. 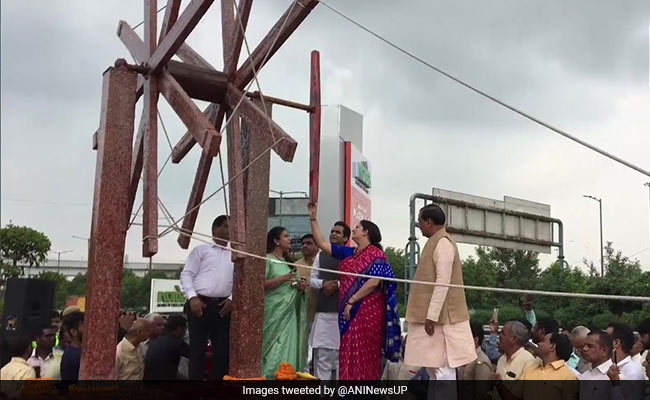 The charkha has been installed in Sector 94 near the Mahamaya flyover.

The country's largest charkha, or spinning wheel, made of used plastic waste was inaugurated in Uttar Pradesh's Noida on the eve of Mahatma Gandhi's 150th birth anniversary, officials said.

The spinning wheel has been installed in Sector 94 near the Mahamaya flyover.

The charkha, which symbolises Mahatma Gandhi's dream of Swadeshi (self sufficing and self reliance), measures 14 ft by 20 ft by 8 ft and is made of 1,250 kg of used plastic, according to officials.

Praising the Noida Authority for its efforts, Ms Irani said, "The gigantic spinning wheel is not only representative of construction and beautification but also represents our commitment towards the plastic-free campaign."

The charkha has been recognised as the largest made of used plastic waste in the country by India Book of Records, Noida Authority CEO Ritu Maheshwari said.

Noida Authority General Manager Rajeev Tyagi said the authority is focusing on raising awareness among the people for proper disposal of waste and recycling of plastic wherever possible.

"The effort would be scaled up in coming days and solid waste management improved," he said.