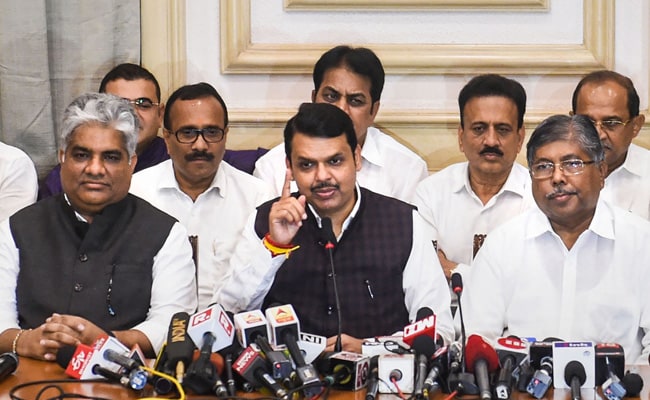 The BJP's Devendra Fadnavis, announcing his resignation as Chief Minister of Maharashtra, took a parting shot at the Shiv Sena-Congress-NCP front that challenged his nascent government in the Supreme Court today. "However the next government is formed... whoever leads it... I can say this for sure - it will be a very unstable government. The wheels of this government will head in three different directions," Mr Fadnavis, whose second term in office was brief and dogged with controversy, told reporters.

Mr Fadnavis's resignation follows a meeting between Prime Minister Narendra Modi and Home Minister Amit Shah in parliament in Delhi. The two senior leaders of the ruling BJP met after the Supreme Court verdict this morning that directed the Devendra Fadnavis government must face a floor test in the Maharashtra Assembly on Wednesday evening.

The two reportedly discussed the party's options in Maharashtra, whether Mr Fadnavis should quit or go through with a floor test that would be tough for the BJP to win.

A message from the leadership went to Mr Fadnavis after the meeting.

Devendra Fadnavis's resignation was welcomed by Congress spokesperson Randeep Surjewala, who said the lack of majority of those "who kidnapped the people's mandate" has been exposed.

"Devendra Fadnavis and Ajit Pawar should apologise to the people of Maharashtra. Their government was based on lies and defections and fell like a house of cards," he said.

Only a few hours before Mr Fadnavis stepped down NCP leader Ajit Pawar, who had been sworn in as Deputy Chief Minister on Saturday, resigned. Mr Pawar led a breakaway in support of the BJP; he had claimed the support of all 54 NCP MLAs, giving the BJP a total of 170 seats.

However, nearly all those 54 MLAs returned to the party fold in the hours following the early morning swearing-in and more than 50 also participated in a show of strength at a five-star hotel in Mumbai on Tuesday evening.

This left the BJP struggling to reach the 145-seat majority mark in the 288-member Assembly; the party has 105 of its own MLAs and the support of 11 independents. It needed at least 40 more MLAs on its side to be able to pass tomorrow's floor test.

Relations between the BJP and the Sena, two of the oldest (now former) allies in Indian politics, disintegrated in the days and weeks after last month's election.

Among other things the Sena had demanded that the Chief Minister's post be rotated between the two parties - something Mr Fadnavis today said had never been agreed upon.

A miffed Sena then approached the opposition alliance - the Congress and the NCP. On Saturday the three were inches away from staking claim to the government before the BJP's dramatic move.