The Shiv Sena in its mouthpiece Saamana says the Devendra Fadnavis government also tried using 'divide-and-rule' tactics to break pro-Maratha protests in the past. 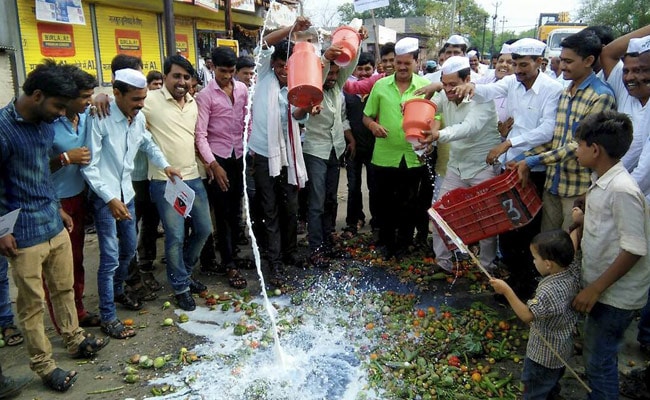 Farmers in Maharashtra have been protesting since June 1, demanding farm loan waiver. (PTI)

Mumbai: The Maharashtra government is trying to create a rift among protesting farmers in order to break their unity, the Shiv Sena said today in an editorial in the party mouthpiece Saamana. Similar tactics were used to crush the Maratha stir in the past, the Shiv Sena editorial said.

"Had the demands of farmers been accepted, they would have showered the CM with flowers. But some people in the government took (Minister of State for Agriculture) Sadabhau Khot with them and tried to break farmers unity," the Shiv Sena said.

"A divide and rule policy is being used. Leaders who went to 'Varsha' (to hold talks with the CM at his residence) need to answer if any of their demands were met," it said.

Farmers in Maharashtra have been protesting since June 1, demanding farm loan waiver due to crop failure and a guaranteed minimum support price or MSP, among other demands.

"The CM says 35-40 lakh farmers will be benefited with the loan waiver. But can he answer what about those farmers in Marathwada who have a land holding of more than two hectares and are dependent on rains ?" the Shiv Sena said.

"The state government has tried to delay its death temporarily. First farmers were called to his house (Varsha), were insulted and finally given nothing. The farmers have no trust in the government and hence are continuing their strike," the Shiv Sena said.

It said the chief minister got an opportunity to temporarily save his government by creating a rift among the farmers. "But, will farmers get a guaranteed rate for their produce? Sadabhau's ministerial position will stay but will extinguished gas stoves of farmers' light again?" the Shiv Sena said in the editorial.

Also, attempts made to break the strike by farmers point at the government's failure, the Shiv Sena said. The Shiv Sena said it is not known whether Jayaji Suryawanshi, who was part of a delegation that met the CM and announced calling off the strike, has given a guarantee that farmers won't commit suicide for the next four months.

After holding talks with farmer leaders Friday night, the chief minister on Saturday announced that his government would waive loans of farmers with small landholdings. He said 80 per cent of such farmers are in Vidarbha and Marathwada.
Comments
Shiv SenaMaharashtra farmers protestDevendra Fadnavisloan waiverminimum support priceMSP