Congress, NCP, Raj Thackeray's Maharashtra Navanirman Sena and Shiv Sena, a part of the alliance ruling Maharashtra, have come out in support of the farmers. 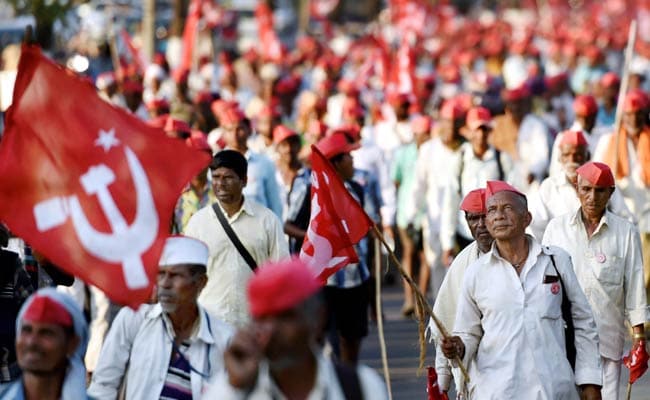 The farmers' march that began with 20,000 protesters six days ago have increased to 50,000

Mumbai: The roads leading to Mumbai turned into a sea of red as thousands of farmers marched around 180 kilometres - from Nashik to Mumbai - over the last six days. Tribals and farmers joined the protest in large numbers along the way, and according to the organisers, their numbers have increased from around 20,000 when they started six days ago to 50,000 at present.

Congress, NCP, Raj Thackeray's Maharashtra Navanirman Sena and Shiv Sena, a part of the alliance ruling Maharashtra, have come out in support of the farmers.

The farmers plan to gherao the Maharashtra state assembly demanding complete loan waiver, fair pay and transfer of adivasi land to farmers who have been tilling it for years. They also want to implement the Swaminathan Committee report, which says farmers should be paid one-and-a-half times the cost of production and the Minimum Support Price should be fixed keeping this in mind.

The protesting farmers, camped at the KJ Somaiya Ground in central Mumbai's Sion, started moving towards south Mumbai's Azad Maidan last night. They reached south Mumbai's Azad Maidan around 5am this morning. Locals in Mumbai distributed food and water among other things to the protesting farmers. Packets of biscuits, snacks and water were pressed into tired hands. Many had come with boxes of footwear, moved by images of calloused, blistered and even bleeding feet.

Here are the LIVE Updates of the Maharashtra farmers' protest:

Mar 12, 2018 19:41 (IST)
The farmers' demands included an unconditional loan waiver scheme. Some of the farmers had failed to qualify for any financial relief under a Maharashtra government initiative from last year.
Mar 12, 2018 19:33 (IST)
The Maharashtra government has given its acceptance in writing to the farmers' demands, according to the state minister Chandrakant Patil. A delegation of farmers had met government representatives earlier in the afternoon.

Maharashtra Farmers Protest In Mumbai: Mumbai With Farmers. Food, Footwear, Flowers For Protesters
More and more residents of Mumbai have come out in the support of the "sea of red". Organisations went with hundreds of boxes to Azad Maidan and distributed water, dates and biscuits. In Vikhroli, a schoolboy was among those who distributed food packets to the protesters. Resident associations lined up along the Eastern Express Highway, like in a marathon, handing out water and poha (snack made of flattened rice).
As the large contingent of farmers in red caps passed through their neigbourhood in Mulund, some residents showered flowers.
Mar 12, 2018 14:49 (IST)
"Around 90 to 95 per cent of the participants are poor tribals. They are fighting for forest land rights. They are landless and can't do farming. The government is sensitive and positive towards their demands," the Chief Minister Devendra Fadnavis said.
"A ministerial committee has been formed to discuss the demands with protesters. We will take a decision to resolve their issues in a time-bound manner," he said.
Mr Fadnavis said his government was in touch with the organisers of the march since March 6, reported PTI.
Mar 12, 2018 14:47 (IST)
NCP leader Ajit Pawar also appreciated the protesters for not causing hardships to students appearing for exams.
"All parties have supported their just demands. Instead of a ministerial committee, the chief minister should intervene immediately and take decisions on their demands. The government should ensure there is no law and order problem as the protesters have said they will not leave Mumbai until their demands are accepted," Mr Pawar said, PTI reported.
Mar 12, 2018 14:45 (IST)
Maharashtra assembly's Leader of Opposition Radhakrishna Vikhe Patil lauded the farmers participating in the 'Kisan Long March' for their peaceful protest while they demanded a complete loan waiver and compensation for hailstorm and pink bollworm pest attack on crops, news agency PTI reported.
"They reached Azad Maidan early this morning from KJ Somaiya Ground in the eastern suburbs so that students appearing for their board exams are not hassled due to traffic jams. The Mumbaikars are also taking care of them," he said in the House, PTI reported.
Mar 12, 2018 14:43 (IST)
Maharashtra Chief Minister Devendra Fadnavis said his government was "sensitive and positive" towards the demands of farmers and tribals, who marched from Nashik to Mumbai to draw the administration's attention towards their problems, news agency PTI reported.
Mar 12, 2018 14:37 (IST)

They are farmers who need to be heard. It's unfortunate to be insensitive to those who feed us and put ideological cages on them. I'm proud of my fellow Shiv Sainiks who are with them nursing their wounds, and voicing the farmers in the Assembly too, only seeing their need. pic.twitter.com/6eJfhc1RTI

The mammoth #FarmersMarchToMumbai is a stunning example of people's power. The Congress party stands with the Farmers & Tribals marching to protest against the Central & State Govts. apathy.

I appeal to PM Modi and the CM to not stand on ego and to accept their just demands. 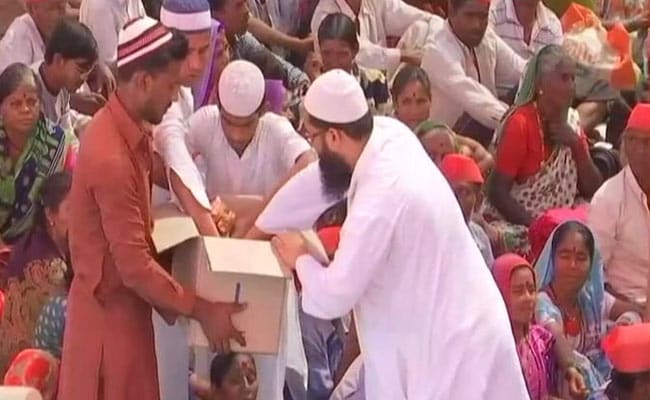 On an appeal from the Chief Minister, who urged the farmers not to hold up traffic on a day of crucial school exams, the crowd decided to forgo rest and sleep. A little after midnight, they started walking towards the Azad Maidan, 15 km from Sion.

One of the protesting farmers said he never had a chance to go to school and appreciated the request to spare students any trouble. "I understand the importance of education and our protest will not create problems for students as well as commuters," he told NDTV.

Mar 12, 2018 11:31 (IST)
All India Kisan Sabha listed out their demands on Twitter. According to the posts, the farmers demand:
a complete loan waiver
remunerative prices for agricultural produce
implementation of Swaminathan Commission's recommendations & Forest Rights Act
change in the proposed river-linking scheme in Nashik, Thane & Palghar districts. They want water to be made available in these and other drought prone districts. They want the authorities to not submerge tribal villages
that the temple lands and pasture lands to be vested in the name of the tillers
increase in pension schemes to poor peasants and agricultural workers
that the burning issues connected to the public distribution system (PDS) be resolved
Mar 12, 2018 11:24 (IST)
20-member delegation of farmer leaders, including top leaders of All India Kisan Sabha, to meet the Maharashtra Chief Minister Devendra Fadnavis.
Mar 12, 2018 10:24 (IST)
The CPI(M)-affiliated All India Kisan Sabha, which is spearheading the protest, said it will consider what the government has to offer.
Paying heed to chief minister Devendra Fadnavis's appeal to not inconvenience students appearing for their class 10 exams, the farmers marched overnight to Azad Maidan. News agency PTI quoted CPI(M) leader Ashok Dhawle as saying, "We will begin our rally after 11 am today so that students appearing for their Class 10 board exam don't face any difficulties," CPI(M) leader Ashok Dhawle was quoted as saying by news agency PTI.
Mar 12, 2018 09:50 (IST) Farmers walked from the KJ Somaiya Ground in central Mumbai's Sion to Azad Maidan in south Mumbai overnight. The protesters are now camping at Azad Maidan from where they will march to the state assembly.
Mar 12, 2018 09:15 (IST)
"We will talk to them and sort out their issues. The government is positive on their demands. Most of the agitators are tribals, and their main demand is forest land rights," Mr Fadnavis told news agency PTI.
"We have set up a committee of ministers to hold discussions on their demands. I have invited them (farmer leaders) for talks. I have only made an appeal that they should not cause any problem to the traffic since it's an exam day and more than one lakh students will get affected," Mr Fadnavis said.
Mar 12, 2018 09:13 (IST)
Maharashtra Chief Minister Devendra Fadnavis said on Sunday that his government will talk to the farmers who have undertaken a 'Long March' to the city to press their various demands.