The Punjab Maharashtra Cooperative Bank was hit by a crisis after real estate firm HDIL defaulted on loans amounting to Rs 4,355 crore, forcing the RBI to cap cash withdrawals at Rs 25,000. 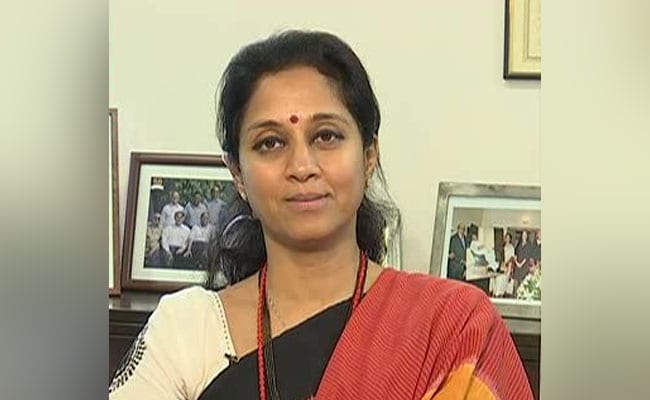 Supriya Sule has rejected any possibility of a Congress-NCP merger.

Nationalist Congress Party leader Supriya Sule today urged the central government to set its "political agenda" aside and step in to help depositors of the Punjab Maharashtra Cooperative (PMC) Bank, which is being investigated in connection with a Rs 4,355-crore fraud case. Her appeal comes barely two weeks ahead of the Maharashtra assembly elections.

"Not everything in life is about politics -- it's also about reality and honesty. I stand firmly with every honest depositor who needs our support and help. I request our Finance Minister, who is currently in Mumbai to campaign for her party, to help these honest citizens get their hard-earned money back immediately," Ms Sule, also the daughter of NCP chief Sharad Pawar, told NDTV in an exclusive interview.

The NCP leader's statement came hours after Finance Minister Nirmala Sitharaman met a group of angry PMC Bank customers at the BJP office in Mumbai, and assured them that she will convey their concerns to the RBI Governor. The bank was hit by a crisis after real estate firm HDIL defaulted on loans amounting to Rs 4,355 crore, forcing the central bank to cap withdrawals at Rs 25,000. Many depositors, including television actor Nupur Alankar, have protested the "unfairness" of not being able to withdraw their own money due to decisions taken by the bank.

HDIL directors Rakesh and Sarang Wadhwan were arrested by the Economic Offences Wing of the Mumbai Police in this connection last week.

Ms Sule claimed that the PMC Bank crisis was only one of the many symptoms of the BJP-led National Democratic Alliance government's "mismanagement of the economy" since it first came to power in 2014. "We have been protesting against the state of the economy almost every day, and have even launched campaigns in this regard. We don't just complain, we also offer solutions to rectify the problems facing the country," she said, denying suggestions that the country's opposition was in a weakened condition.

Incidentally, Sharad Pawar and his nephew - Ajit Pawar - are accused in another alleged bank scam involving the Maharashtra State Cooperative Bank. However, Ms Sule reiterated in her interview with NDTV that the allegations against NCP leaders stemmed strictly from political considerations. "The allegations are false, and everybody knows that. These claims were brought up before the 2014 elections also. As the BJP-led Maharashtra government has done nothing in the last five years, it is now resorting to personal attacks," she said, terming Chief Minister Devendra Fadnavis as a "translator" for Prime Minister Narendra Modi with no original claims of his own.

However, while Ms Sule claimed that the Congress and the NCP were united in its resolve to defeat the BJP-Shiv Sena alliance, she rejected party leader Sushilkumar Shinde's recommendation of a political merger. "If I don't have to go down that road, why should I worry about it?" she asked.

Maharashtra goes to the polls on October 21, and the votes will be counted three days later.