Devendra Fadnavis said that leaders and workers doing good job in other parties were joining the BJP trusting Modi's performance and schemes being carried out by the Centre for the poor and farmers. 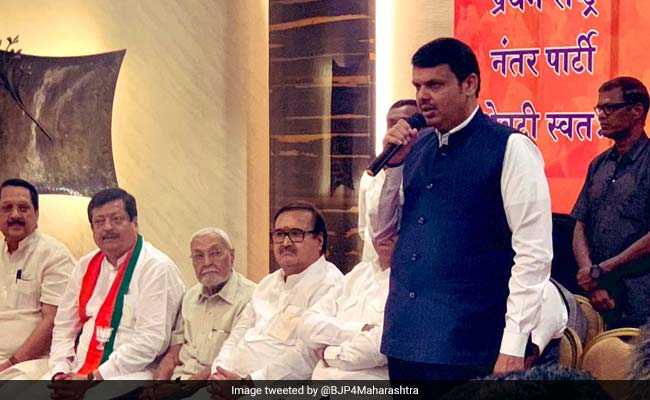 The two leaders joined the party in presence of Devendra Fadnavis.

In another setback to the NCP ahead of next month's polling, its state unit vice president Bharti Pawar on Friday joined the BJP, while Congress leader Pravin Chheda also returned to ruling party.

The two leaders joined the BJP in the presence of Chief Minister Devendra Fadnavis and other senior functionaries of the party in Mumbai.

Mr Chheda, a three-term corporator in the Brihanmumbai Municipal Corporation (BMC), had quit the BJP to join the Congress seven years ago reportedly due to his differences with the then local MLA Prakash Mehta, currently a minister in the Maharashtra government.

Speaking on the occasion, Mr Fadnavis claimed that BJP Rajya Sabha MP Sanjay Kakade will continue to be in the party.

His remark comes in the wake of reports that Mr Kakade was unhappy with the BJP and that he was likely to join the Congress.

Without naming the opposition parties, Mr Fadnavis slammed those "who speak the language of Pakistan and questioned the surgical strike" post Pulwama terror attack.

Polling will be held in Maharashtra in four phases next month.

Mr Pawar said she was impressed by the developmental works carried out across the country and in Maharashtra under the leaderships of Prime Minister Narendra Modi and Fadnavis respectively.

"Their works over the past five years have inspired me to join the BJP. I will work for the uplift of the poor and tribals," she added.

Expressing satisfaction on his return to the BJP fold, Mr Chheda said he was impressed by the development works being carried out by the BJP governments.

He claimed that the Congress had offered him candidature from the Mumbai North East seat, but he ignored the offer and came back to the BJP instead.

"I will play the role the party wants me to play now," Mr Chheda added.

Mr Fadnavis said that leaders and workers doing good job in other parties were joining the BJP trusting Modi's performance and schemes being carried out by the Centre for the poor and farmers.

"Kakade is in the BJP. He was unhappy for some reason of late. The Congress contacted him then and offered a poll ticket from Pune...But after my meeting with him, he decided to end the animosity," Mr Fadnavis said.

The chief minister said that Kakade has been asked to focus on campaigning for the party in western Maharashtra.

Mr Fadnavis said the pride of the nation has awakened under PM Modi's leadership that isolated Pakistan in the world following the Pulwama attack last month.

"Sometimes I feel bad that nationalism is politicised. Some people questioned the surgical strike, while some are of late speaking the language of Pakistan.

"So, I have to tell them questions will be raised on your patriotism if there is no difference between the language you and Pakistan speak," he said.