Maharashtra Election 2019: "Am I Talking To The Next Chief Minister?" What Aaditya Thackeray Said

The decision to field Aaditya Thackeray marks a significant departure for the Shiv Sena's first family, which has always limited itself to campaigning for candidates.

Election in Maharashtra: Aaditya Thackeray will contest from the Worli seat.

Shiv Sena leader Aaditya Thackeray took out a huge roadshow in Mumbai today before filing his nomination papers to contest the October 21 Maharashtra election from Worli. The 29-year-old is the first of his family to contest an election in the five decades since his grandfather Bal Thackeray founded the Shiv Sena.

Aaditya Thackeray was seen waving, against the backdrop of his posters and saffron Sena pennants held up by workers, as his open top jeep glided through a narrow street in Mumbai. The occasion became a huge show of strength for the Shiv Sena, which has been pitching him as the party's chief ministerial face. The young Sena leader began the road show from a Shiv Sena office in Lower Parel and ended it at the BMC Engineering Hub in Worli, where he filed his nomination papers.

Visuals this morning showed him inside Bal Thackeray's room, bowing before a portrait kept on his grandfather's bed before setting out.

"I am very happy, you can see the love of the people," said Aaditya Thackeray, in a white shirt and dark trousers, his hair speckled with marigold petals showered by workers.

"Am I talking to the next Chief Minister," asked a journalist. He smiled: "You are talking to someone who will always serve the state."

He told reporters that his aim was a "Naya (new) Maharashtra". For his nomination, his father and Shiv Sena Chief Uddhav Thackeray, mother Rashmi and brother Tejas were present. 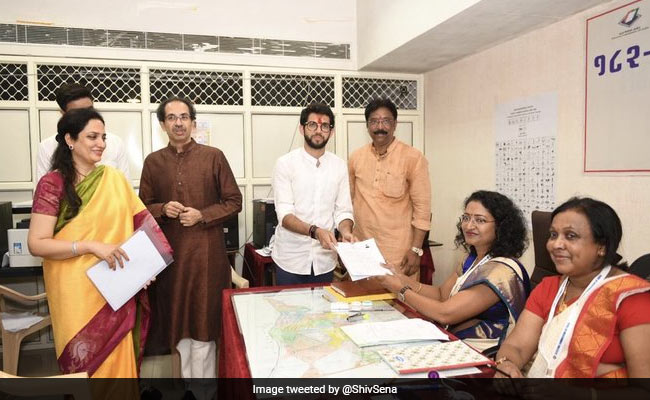 Huge hoardings of Aaditya Thackeray were seen across Worli, where he is likely to get a walkover; it is a Sena stronghold and the only opposition, NCP's Sachin Ahir, crossed over recently. Sitting MLA Sunil Shinde, who is making way for Aaditya, said: "I am also a Shiv Sainik. Whatever I have got is because of Shiv Sena and Balasaheb. And for what I have got if I can give something for Aaditya; it's a matter of happiness for me."

The decision to field Aaditya Thackeray marks a significant departure for the Sena's first family, which has always limited itself to campaigning for candidates.

Sources say junior Thackeray, groomed to take over the Sena one day, has been working up to the moment, emerging as the affable, softer face of a party known for its unabashed pro-Hindu agenda. He was appointed the youth wing chief by Bal Thackeray nearly 10 years ago. Earlier this year, he took out a Jan Aashirwad Yatra, a mass outreach that combined thanks-giving for the national elections with appeals for votes in the Maharashtra polls.

The party also believes it is time that someone from the family has a voice in the Maharashtra assembly, which, feel top leaders, will also improve the Sena's profile.

The only other Thackeray who came close to contesting an election was Raj Thackeray, who announced he would fight the 2014 Maharashtra polls but later backed out.

"The love I have got in the Jan Aashirwad Yatra and then this is quite big. What I have promised to Worli is to make Worli A+ and creating a renewed Maharashtra with a renewed. Vigour. To NDTV I promise, Maharashtra will be Swachh and Swasth," Aaditya told NDTV.

The Maharashtra election results will be announced on October 24.