Mahadevi Varma Is Today's Google Doodle: Know All About The Celebrated Hindi Poet

Google Doodle is celebrating Mahadevi Varma, the Hindi poet and women's rights activist. She received the Jnanpith Award for her outstanding contributions to Indian literature on April 27, 1982. 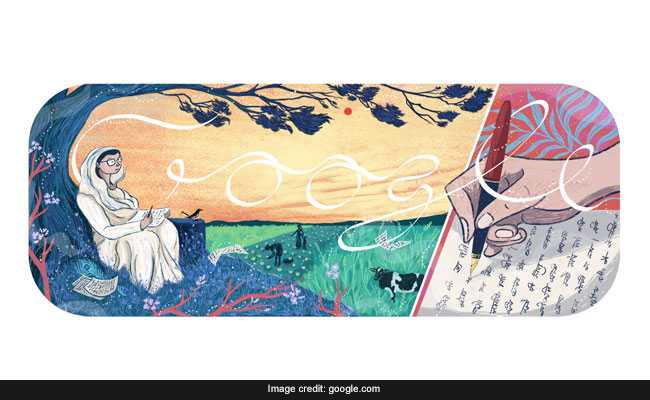 Mahadevi Varma, celebrated Hindi poet, freedom fighter, women's rights activist and educationist, was honoured by Google with a Doodle. In 1982, Mahadevi Varma received the Jnanpith Award for her outstanding contributions to Indian literature on April 27. Google is celebrating this day in honour of the transformative poet.Google Doodle, made by guest artist Sonali Zohra, shows the poet penning her thoughts into beautiful verses under a tree by the field on a breezy afternoon. Also known as 'modern Meera', Mahadevi Varma was born on March 26, 1907, in Uttar Pradesh's Farukhabad.

Google India tweeted, "With a passion for poetry, Mahadevi Varma wrote her way to greatness. Today, we celebrate her fight for the nation's freedom and her contribution to the Indian Neo-Romantic poetry movement with a #GoogleDoodle."

With a passion for poetry, Mahadevi Varma wrote her way to greatness. Today, we celebrate her fight for the nation's freedom and her contribution to the Indian Neo-Romantic poetry movement with a #GoogleDoodle. https://t.co/iF6NXNQA4Fpic.twitter.com/DoJgxFPOOj

She was married at the tender age of nine in 1916, but she remained at her parental home and continued her education at Crossthwaite Girls' School in Allahabad.

While pursuing masters in Sanskrit, she penned her first verses in secret -  only to be discovered by her roommate and friend, Subhadra Kumari Chauhan (herself a well-known poet).

"Today, Mahadevi Varma is considered one of the foundational poets of the Chhayavad movement in Hindi literature," the Google Doodle post further said.

In her biography "Mere Bachpan Ke Din" (My Childhood Days), Mahadevi Varma wrote that at a time when a girl child was considered a burden upon the family, she was very fortunate to be born into a liberal family.

Mahadevi Varma's poignant poetry, and later, essays, often centered on the experience of being a woman. Her feminist work appeared in magazines and books, and her collection of short stories, "Sketches from My Past," portrays the women she encountered while principal of an all-girls school.

Mahadevi Varma championed the women's rights and also explored the topics of tradition with great fondness.