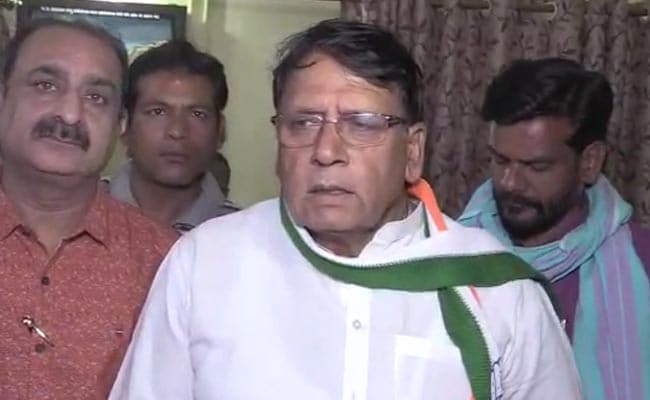 Madhya Pradesh Law Minister PC Sharma stirred controversy while addressing an election rally in state capital Bhopal on Wednesday. The minister told Congress workers that jobs will be provided to all those who work at polling booths. Congress veteran Digvijaya Singh is contesting from Bhopal parliamentary constituency. The BJP is yet to name its candidate from the prestigious seat.

District Collector, Sudam Khade, yesterday issued a notice to the minister for violation of model code of conduct.

While campaigning for former Chief Minister Digvijaya Singh at Narmada Bhavan in the city, Mr Sharma said, "We have 284 booths and those who man the booths will get jobs in the government or private sector."

Digvijaya Singh and former union minister Suresh Pachouri were present at the meeting.

The state BJP claimed that Mr Sharma's statement is a "clear violation of model code of conduct".

"If the minister is openly saying that each booth worker will be offered a job, it is definitely a violation of model code. We will lodge a complaint with the Election Commission. They are just trying to gain brownie points in front of Digvijaya Singh but while doing that they are making a mockery of the Constitution," said BJP lawmaker Rameshwar Sharma.

Mr Sharma, later on, said that unemployment in Madhya Pradesh has spiked in the last 15 years during Shivraj Singh Chouhan's tenure as Chief Minister. There are around 30 lakh registered unemployed youth in the state including 1,26,794 only in Bhopal. The state law minister claimed that joblessness is the key issue and he will "proudly" offer jobs to people.

Madhya Pradesh votes in four phases on April 29, May 6, 12 and 29. Counting will take place along with the rest of the country on May 23.