Jyotiraditya Scindia was inducted into the party by BJP president JP Nadda. Mr Shah was not present as reports had suggested. 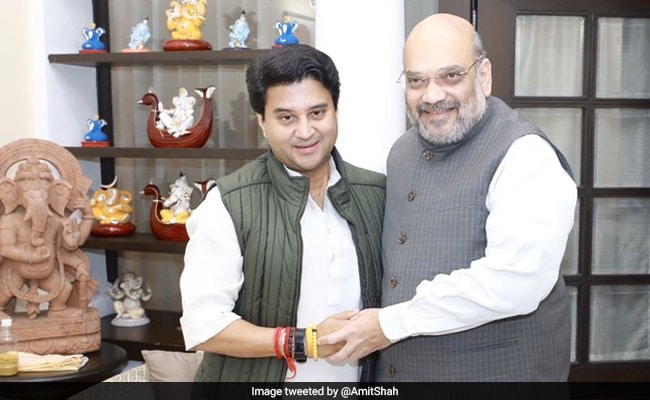 Home Minister Amit Shah today shared a photo of his meeting with Jyotiraditya Scindia in a tweet a day after the former minister joined the ruling BJP. A similar post was also put out by Defence Minister Rajnath Singh.

"Met Jyotiraditya Scindia ji. I am sure his induction into the party will further strengthen BJP's resolve to serve the people of Madhya Pradesh," wrote Amit Shah, who had accompanied the four-time MP to his meeting with Prime Minister Narendra Modi on Tuesday.

I am sure his induction into the party will further strengthen BJP's resolve to serve the people of Madhya Pradesh. pic.twitter.com/jrxAAWrjyl

It was after that meeting with PM Modi and Amit Shah that Mr Scindia, a long-time Congress leader close to the Gandhi family, tweeted his letter of resignation addressed to Sonia Gandhi.

Mr Scindia was inducted into the party by BJP president JP Nadda. Mr Shah was not present as reports had suggested.

This morning, the newest BJP recruit also met with Rajnath Singh, who tweeted: "I welcome him to the BJP. His joining will help in further strengthening the party. I extend my best wishes to him in all his endeavours."

Mr Scindia will file his nomination for the Rajya Sabha elections on March 13. He also expected to take out a roadshow in Bhopal after his return for the first time as a BJP leader.

The former Guna MP is instrumental to the BJP's perceived plans to take power in Madhya Pradesh, where the Congress government of Kamal Nath may be staring at collapse after the exit of more than 20 MLAs with Mr Scindia.

The Madhya Pradesh Congress had earlier trolled Mr Scindia in a post, pointing to the absence of any welcome tweets for him from PM Modi or Amit Shah.

"Not even a tweet by Narendra Modi ji or Amit Shah ji to welcome Scindia ji! Modiji, Shah ji, at least do not do it so soon! It has not even been 24 hours yet and you guys have already started humiliating him...!" Madhya Pradesh Congress tweeted in Hindi.