"Portfolios Will Be Allocated After I Reach Bhopal": Shivraj Singh Chouhan

"Cabinet expansion has taken place in Madhya Pradesh. Portfolios will be allocated after I reach Bhopal," Shivraj Singh Chouhan told reporters after meeting with the Defence Minister. 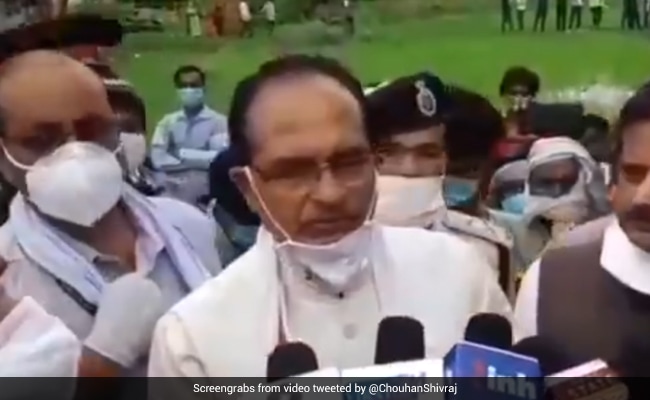 Shivraj Singh Chouhan portfolio allotment will be done soon after he returns to the State.

Madhya Pradesh Chief Minister Shivraj Singh Chouhan met Union Ministers Rajnath Singh and Ram Vilas Paswan on Sunday and said that portfolio allotment in his recently expanded Cabinet will be done soon after he returns to the State.

"Cabinet expansion has taken place in Madhya Pradesh. Portfolios will be allocated after I reach Bhopal," Mr Chouhan told reporters after meeting with the Defence Minister.

The chief minister also put out a tweet stating that he had raised the demand, in front of Mr Singh, for an Army school to be opened in Gwalior-Chambal region to help the youths in fulfilling their wish of joining the armed forces.

Later, Mr Chouhan met and wished Union Minister Paswan on his birthday and discussed issues related to his State with him.

"Last year, 73 lakh metric tonne wheat had been procured from Madhya Pradesh, out of which 67 lakh metric tonne had been taken in the central pool while the rest was yet to be taken. I requested the Union Minister to take action in this regard so that the state government will receive some funds during this COVID-19 phase," Mr Chouhan told reporters.

He said that the Union Minister had accepted his demand and had issued immediate orders for the same. Mr Chouhan added that under the ''One Nation, One Ration card scheme'' even the migrant workers from the state will get the benefits of the schemes being run by the Centre to provide grains to them.

"Madhya Pradesh has broken all records this time, it has even surpassed Punjab. 1 crore 29 lakh metric tonne wheat has been brought at the minimum support price (MSP) this time in MP. It will go to the central pool, I thank PM Narendra Modi and Paswanji for this," he added.

He further said that he will meet the Vice-President, President, and senior BJP leader LK Advani tomorrow.

Mr Chouhan on July 2 had held the first cabinet meeting in Bhopal after 28 Ministers were inducted into his cabinet.

This is the second cabinet expansion since the chief minister returned to the helm of State affairs on March 23. He had earlier only inducted five ministers in the cabinet in April.