The agenda for the meetings was to discuss farmers affected by twin irrigation projects, but political pundits felt the CM played a 'masterstroke'.

The BJP used the day's events to attack the Congress.

Two high profile meetings - a "chance" meeting between the current Madhya Pradesh chief minister and his predecessor and a much-anticipated meeting with another former CM that didn't materialise - dominated headlines in the state on Friday. The agenda for the meetings was to discuss farmers affected by twin irrigation projects, but political pundits felt Chief Minister Shivraj Singh Chouhan has played a 'masterstroke' on his rival party.

While the CM cancelled the appointment with ex-CM Digvijaya Singh, he had a long chat with another ex-CM Kamal Nath at the state hanger in Bhopal.

Former CM and present Rajya Sabha member Mr Singh then sat on a dharna near the CM's residence over the cancellation of Friday's appointment and sought a fresh appointment from the CM in writing.

Flanked by farmers from Guna, Rajgarh, Vidisha and Bhopal districts, Digvijay Singh told NDTV that he had been requesting the CM's office for a month and a half to discuss the issue pertaining to the farmers whose land will come under the submergence zone of two upcoming irrigation projects. "I was finally given an appointment by the CM's office for the meeting scheduled at 11:15 am on Friday, but hours before the scheduled meeting, I was informed that the CM wouldn't meet me on Friday. Is this what a former CM and present Rajya Sabha member deserves from the present CM," he said. 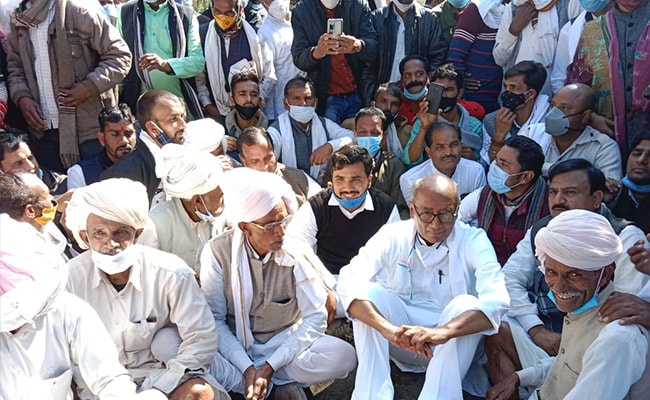 Digvijay Singh at the protest, surrounded by farmers.

Thousands of farmers will be affected by the Tem and Suthalia irrigation projects. Hundreds of acres of land will come under the submergence area of the two projects and several villages would be completely or partially submerged. The affected farmers have not received adequate compensation. They are opposing the compensation package being offered to them against their land.

Showing a map of his land, Shankar Dayaram of Lateri said, "See my land at number 77, everything around it is under submergence but not mine? Others have got compensation; I have not received anything".

Balram from Bairagarh alleges that he is being forced to sell his land for as low as 2 lakhs per bigha. Hari Singh said, "The survey was not done, I have got no benefits - neither any house under PM Awas nor toilets...if the authorities take my land, where will I go?"

Mohar Singh of Raghunathpura said, "Our entire village will be submerged. We want that the government should pay 60 lakh per hectare as compensation".

The CM Shivraj Singh Chouhan was on way to Dewas to attend a BJP event, while ex-CM and present Leader of Opposition Kamal Nath had just landed in Bhopal after a trip to his assembly constituency Chhindwara when they met by chance at the state hanger, not briefly, but reportedly for around 20 minutes.

After the meeting, Kamal Nath suddenly arrived at the protest site. While talking to the media, he said, "The CM told me that he had no problem in meeting with Digvijaya Singh, but still why is he staging a dharna? But when I met Digvijaya Singh, he told me that he was seeking time from the CM for a month and a half, and the time for the meeting was fixed". However, Kamal Nath was visibly irritated when the media repeated the questions on the "chance meeting". 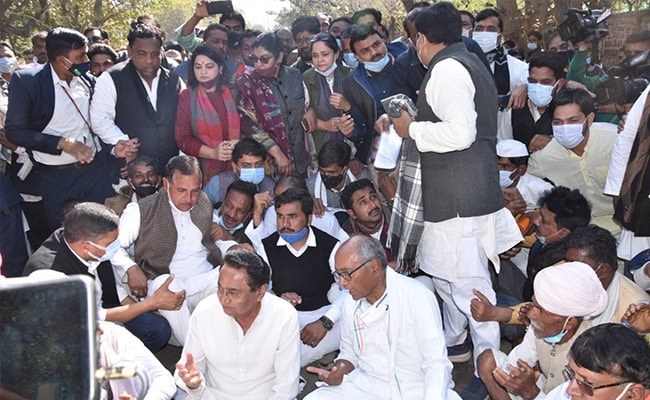 Kamal Nath with Digvijay Singh at the protest.

The BJP then used the day's events to attack the Congress, calling the party a "divided house".

Cabinet Minister Vishwas Sarang said that this is the result of factionalism in Congress. "Digvijay Singh pulls such stunts to keep himself in the news. The Chief Minister has met Kamal Nath, the main issue is that Digvijay Singh talks in this tone just to stay in the news. Even Kamal Nath himself is not giving him time to meet".